The school holidays are over.  Like most teachers, I return to teaching tomorrow after spending much of the break researching and planning for my classes.  I did manage some relaxation and fun, but also tackled clearing out in preparation for springtime painting and came across a box with newspaper clippings and some old stories and poems, which reminded me of why I began writing.

I was reminded too of some successes and that is no bad thing – it is too easy to let rejections or disappointment loom large and forget the joy when your words work and others appreciate them too.

I’ve always enjoyed telling stories about ordinary people, showing them triumph or cope in the midst of life’s challenges, giving hope or showing they are not alone in their suffering, grief, adventure, experience, relationship difficulties… ordinary people can live extraordinary lives and they deserve a voice. I love it when someone remembers my characters or stories, the words have resonated, a connection has been made. 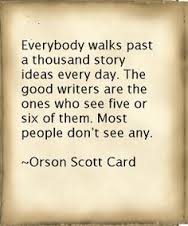 In the early days of Mordialloc Writers’ Group when I was a beginner writer, my husband John was diagnosed with asbestosis and later cancer. Through his work within the trade union movement and when I was employed there too, we had come in touch with many people with various types of cancer, but now it was personal. Ironically, it became more personal for me when I was diagnosed with breast cancer after John died.

Unsurprisingly, a lot of my writing was around the subject of cancer, people struggling with the disease, how people react when diagnosed, how they live with it, although I never set out to write solely on that subject and did write about other topics, especially in my writing for children.

However, my first published successes were on the subject of cancer. I tried  to make my words emotionally moving for readers so they understood or cared about people dealing with it directly or indirectly and the outlet for my work was the Anti-Cancer Council’s  Daffodil Day Literary Competition. 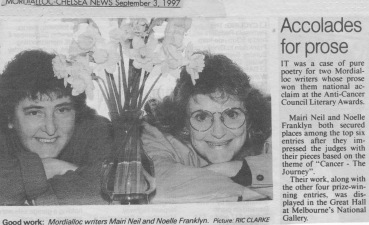 The competition had very specific rules and in the early days the word limit was 500 words, then 750 words, and today I think stories can be 1000 words or more.

Along with the newspaper cuttings and congratulatory letters I also found a bundle of stories I never sent in, but wrote with a theme or specific word count in mind. The following is one I wrote about Fred, a very dear friend of John’s. We shared his battle with inoperable lung cancer. I hope I do him justice.

Twelve months! Is that what the Doc said? Maybe longer with treatment. This is not happening. Not today, with that vivid blue sky and the sea a turquoise carpet – hope it’s magic.

There’s that deformed bloody seagull screeching, scavenging balancing on a spindly leg, determined to stay in the game. I’m with you matey!

I’ll have the chemotherapy, radiotherapy, pills – whatever lengthens the odds. Perhaps return to sea on a coastal vessel. I’ve survived plenty of turbulence and near disasters – I’ll survive this hiccup ashore. Doctors can be wrong… I’ll get a second opinion.

When will I be returning to work? Can’t you read? What does it say on that doctor’s certificate? I have terminal cancer and twelve months to live. Today they gave me some hope… chemo seems to be working. I could be in remission. No, that doesn’t mean I’m cured! Who’s going to employ me sonny?

Mountains of red tape just to keep cash coming in. Big bucks out – for doctors, radiographers, chemists, physios, hospitals. I’ve worked hard, always paid my fair share of tax and now every snotty-nosed kid and snooty-nosed government official know more about my finances than I know meself! Trying to find out about Super’s a nightmare!

Why me? A couple of more years and I’d be on the pension, taking the dream cruise or grey nomad adventure!

The support group did help – glad I went. Never thought I’d be meditating or obsessing about nutrition. Fancy swallowing herbs in preference to a beer? Thought that lark was for hippies and cranks. If the blokes down the wharves knew! Well, I’ll drink as much foul-tasting goo as necessary if it keeps me alive.

Life is better when I’m calmer. When meditating I can feel Jean’s presence, helping me cope. I appreciate the blokes ringing and neighbours popping in. The sunlight danced on the waves this morning, the sand glittered like sprinkled fairy dust. Yeah, those bloody herbs, or the meditation must be working!

I’m doing all right. Lost the last bit of hair yesterday, but bald is fashionable. Look at Peter Garrett and all those young ones shaving their heads! Bought meself a surfboard to paddle on Patterson River every morning. Will rebuild the strength in my arms; keep the muscles toned. I’m not ready to shuffle off yet, got things I want to do.

Think I’ll take up diving, consider the sea from a different angle. Doc told me to keep looking forward.

What beaut staff at Peter Mac’s. Great to have access to all this equipment and care. But I’ll be happier when Greg comes home and he can drive me in and out for treatment. Don’t feel as confident driving anymore, get so bloody tired. Look at that poor bugger. At least I’m not that far gone. But he always has a smile and cheery word, probably happy pills. Doc said I can have some if depression hits.

Lucky Greg was with me when I had that bit of a funny turn. Some sort of fit. More bloody tests. CAT scans, ultrasounds – the works. Their best shot. Guess what will be, will be. Greg’s staying ashore to look after me, building a unit in the backyard. Turn up for the books, considering all the scrapes I got him out of when he was a kid! I won’t give up because I know everyone is praying for me.

A brain tumour caused the convulsion. Cancer’s spread. Must beat the odds old son… Just stormbound for a while.

Greg’s a bit quieter these days. S’pose it reminds him of when his mum died. Doesn’t seem like three years. I keep thinking of Jean too, thought she was standing by my bed. Guess I’ll see her soon enough.

Thank God for family. Big sister, Sal’s a trouper taking the load off Greg. Poor bugger doesn’t know whether he’s coming or going. He’s done well arranging with the hospital to borrow equipment. Might as well watch the telly in my own place and the airbed is heaven. Sal doesn’t mind Melbourne’s weather – something to moan about when she returns to Queensland.

‘He’s asleep. Sleeps most of the time now. Very peaceful. No pain at all. I won’t forget to tell him you rang. Yes, he knows how much he’s loved.’

4 thoughts on “Expressing Emotions and Finding The Words”