This year’s World Environment theme is time for nature:

The foods we eat, the air we breathe, the water we drink and the climate that makes our planet habitable all come from nature.
Yet, these are exceptional times in which nature is sending us a message:
To care for ourselves, we must care for nature.
It’s time to wake up. To take notice. To raise our voices.
It’s time to build back better for People and Planet.
This World Environment Day, it’s Time for Nature.

COVID-19 lockdowns restrict movement in neighbourhoods, towns, cities and countryside in countries throughout the world and have done so for several months, and most people now realise how important it is to breathe fresh air and to enjoy outside activities.

The easing of some restrictions in Victoria saw hundreds flock to national parks. Many places were overwhelmed and had to be closed because the recommended 1.5 metres of social-distancing couldn’t be enforced.

We are in the middle of a pandemic that has forced governments to act for the greater good of the public health, even closing international borders despite severe economic consequences.

Ironically, because of less air travel and movement of people, plus reductions in road traffic and industrial pollution, there has been an improvement in some natural areas such as cleaner waterways and a resurgence of wildlife.

However, the consequences of climate change are still severe and deadly and as many people have pointed out – if you believe and obey the science regarding the COVID-19 pandemic why are we not believing and acting urgently on the science about climate change!

As this picture doing the rounds of Facebook shows, the damage fossil fuels cause is not a new discovery – this newspaper date is 1912!

The Speech A Prime Minister Should Make in 2020
© Mairi Neil

Mother Earth, I’m referring to –
the mountains, snows, and sea
the seasons, soil, and sunlight
sustaining you and me

Mother Earth is terminally ill
Man has definitely not been kind
we’ve raped, polluted and poisoned
for wealth, we craved to find

Climate deniers knuckle draggers
as are those mouthing ‘innovation’
drought, bushfires and failed crops
the word should be desperation!

The time for procrastination gone
also the sand for burying your head
Earth’s lungs struggle daily to breathe
how long before humanity all dead? 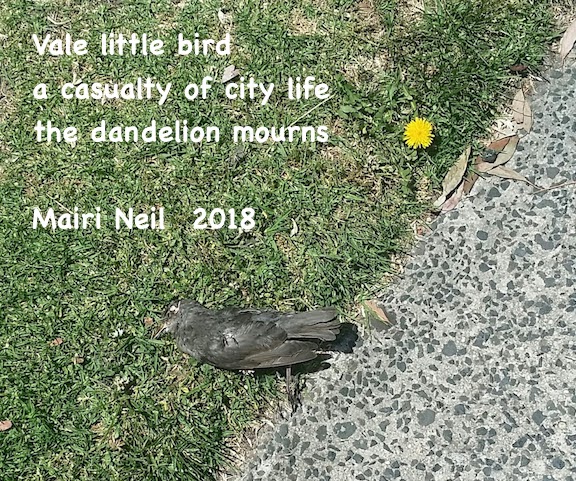 The day is calm. Tranquil. A great-to-be-alive day. The scent of eucalyptus and pine compete with salty air and whiffs of abandoned seaweed.
The cyan sea a mirror for whipped cream clouds. Dainty dollops on a baby blue plate. Gulls sit or glide atop the glassy surface. Bathed in brilliant white sunlight, I imagine I too float and dream.
But in the distance, palm tree fronds tremble, casting lacy shadows on the warm sand. The clink of moorings and creak of masts drifts from the creek and a sudden gust of wind whips sand to sting legs and face. Airborne seagulls now screeching origami kites.
A dark veil unfurls from the horizon shattering the steel blue mirror swallowing the fluffy clouds.
Peaceful contemplation disappears, waves soap around my feet, slap at ankles, sunlight fades. I retreat to the shelter of groaning eucalypts and pine, the taste of salt bittersweet.

Trainers recommend 10,000 paces
exercise and be healthy they say
and put smiles upon our faces

In the future, they’ll discover traces
of how we spent our lives each day
they’ll dig up parks and other spaces
and put names to forgotten faces.

The importance of trees to our wellbeing and the earth’s health is, at last, being recognised by local councils (including Kingston) and I hope many more will become dendrophiles. 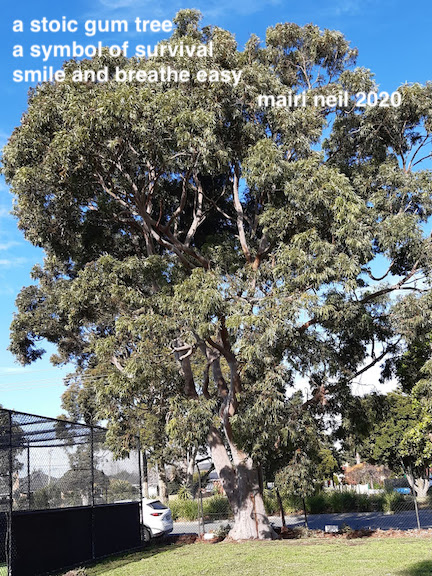 We Have An Extinction Crisis In Australia

Today, I received an email from birdlife.org.au

This year hasn’t been what any of us expected.

Now we’re in a pandemic. While it’s changed how we live and work, COVID-19 hasn’t impacted our commitment to save Australian birds for future generations. We know the bushfires have compounded the extinction crisis. And we need your support to continue our vital conservation work.

Our experts estimate that the number of nationally threatened birds could rise from 134 last year to over 150 after the fires. And among them, for the first time I can recall, are birds such as the usually resilient and successful Superb Lyrebird. A wet forest bird, once considered relatively safe from bushfires, this iconic species lost over half its habitat in the inferno.

We fear the Superb Lyrebird may have plunged from being ‘common’ to being ‘threatened’ in just a few devastating weeks over summer.

If the birds disappear or die
will bugs be kept in check –
what are the consequences
if Nature’s balance, we wreck?

Where would you live if your home
vanished from the neighbourhood?
If someone decided it was needed
for farmland, furniture, or firewood…

Not only birds are endangered
global warming threatens us all –
We must act now to stop
habitat destruction, water shortages,
population pressure and urban sprawl! 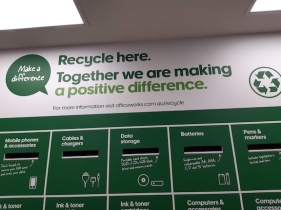 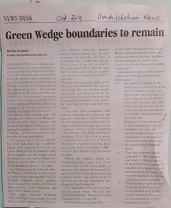 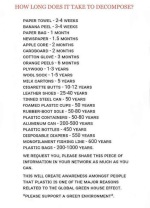 Parks and Places to Play Important For Childhood Memories

I spent my first nine years in Greenock, Scotland, an industrial town on the River Clyde that used to be famous for shipbuilding – the yards built the Queen Elizabeth and first Queen Mary, plus submarines for Australia.

I can’t remember much of the first three years living in a tenement in George Square, the centre of the town, but when we moved to Braeside where I started school, there is plenty of material for trips down memory lane.

Despite the rustic name (brae means hill in Scots), there were no built parks for us to play in. We spent a lot of time in back gardens (‘back greens’) and playing games in the street. Traffic minimal in the 50s and early 60s with my dad being one of the few in the street to own a vehicle. He had a motorbike at first, then bought a Bradford van.

Cars rarely disturbed our play which included hopscotch chalked on pavements (we called it ‘beds’), skipping (often with rope leftover from the clothesline), football, rounders, and British Bulldog and similar games involving lots of chasing, hiding and rough and tumble.

However, we also roamed the hill towering over the houses opposite and the farmer’s fields at the bottom of our road and a swathe of land separating upper and lower streets. The housing scheme stretched up a steep hill, Davaar Road being the topmost street and in the middle of that street, our house was number 35.

Across the road, behind a row of houses, there was a path we could climb to the top of the hill and see Gourock and the River Clyde. There were no tall trees but plenty of scrub, granite boulders and heather. Enough natural flora to keep us entertained with games influenced by episodes of popular shows broadcast by the fledgeling television industry: The Lone Ranger, the Cisco kid, Robin Hood and His Merry Men, and whatever adventure story Walt Disney promoted when he invited us to ‘wish upon a star’ on Sunday evenings.

Up the hill, I learned how to make daisy chains and to check who liked butter by waving buttercups under the chin. A memorable part of the long summer holidays was collecting twigs, branches and anything that would burn to prepare for bonfire night in November.
We never forgot Guy Fawkes and to “Remember, remember, the fifth of November, gunpowder, treason and plot!”

The hill also welcomed children roaming in hordes carrying buckets and jam jars to seek blackberries when in season. The incentive of Mum’s delicious bramble jam spurned us on. We even spread our hunt into the farmer’s fields at the bottom of the street where we weren’t supposed to go. We knew the resident bull to be a danger to life and limb – plus when the Tinkers (Gypsies/Travellers) came they camped in the fields and we were warned to respect their privacy.

Mum and Dad didn’t practice overt bigotry against Travellers like some people. Mum helped them whenever she could by paying them to do odd jobs and buying some goods they hawked, such as wooden ‘dolly’ clothes-pegs.

However, any place forbidden meant we incorporated them as a deliberate dare in games. There must be a guardian angel for stupid children!

Stranger danger not indoctrinated, and we were never overly fearful, although warned to be careful, not ‘ask for trouble’ and to obey the limitations placed on us. But I remember roaming even further afield and going to what we called ‘the secret lake’ along the Aileymill Road. This pleasant track linked the new housing scheme with isolated cottages on the way to Inverkip and Skelmorlie, tiny towns further down the coastline.

If she knew, Mum would never have sanctioned that sojourn, but we fished for tadpoles and hunted frogs and let loose our imagination and energy.

I revisited the secret lake in the 70s and like everything else seen through adult eyes; the lake had shrunk to a large puddle rather than a lake. The farmer’s fields smaller too, and the bull nowhere in sight! 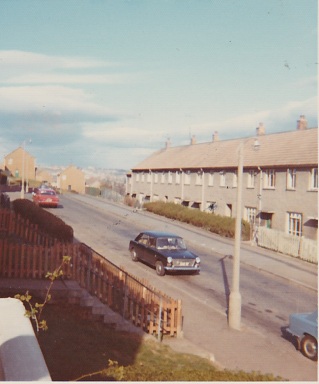 I checked out my old house in the 70s and again in 2017 – Davaar Road has not changed much although the houses modernised inside; sadly Aileymill is no longer bush to roam but another housing estate. 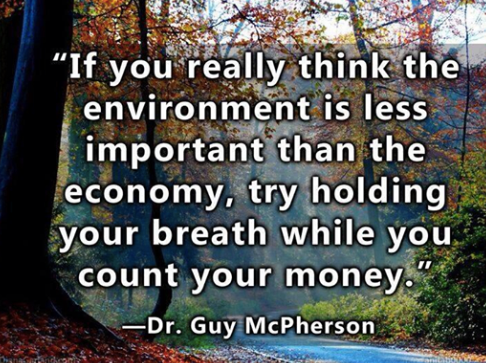 Walk the Neighbourhood Absorb the Beauty of Your Place 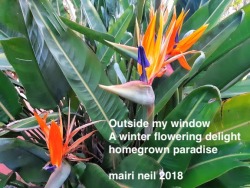 “birds are the always-present possibility of an awakening to the natural world that too many people have not yet experienced.”

A world without birds, I refuse to imagine
nature’s poetry and music gone
the only tweets from computer geeks
and no delights of avian song…

Yet, species disappear or struggle to exist
habitats destroyed by so-called progress
when wildlife families decimated
conservationists struggle for success

A world without birds, devastating
Nature’s poetry and music gone
the only tweets from computer geeks
unless we work to save avian song…