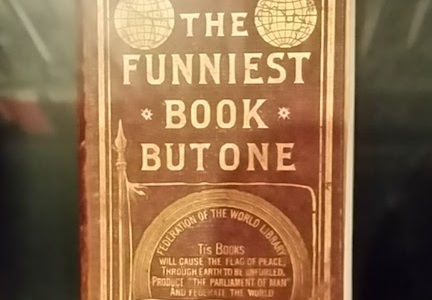 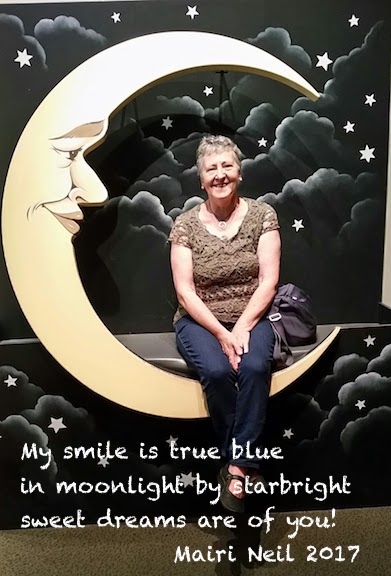 On Saturday, I met my older sister, Cate at Southern Cross Station. A quilter, she had come down from Albury for the weekend to attend a Stitches & Craft show at the Exhibition Buildings in Carlton. We discussed attending weeks ago but no definite arrangements were made until she knew she could get time off work and a seat on the train.

‘The weather’s forecast to be hot and humid – don’t overdress!”

In September, when Cate visited for the Dior Exhibition at the National Gallery we experienced a warmer than average spring day and she regretted wearing too heavy clothes while I worried about her increasingly flushed face and a shortage of breath.

Yes, we are both at that age where warnings about blood pressure, heart strain or breathing difficulties loom large and prescription pills rattle in our bags!

Plans, Preparation – and the Weather!

We caught a tram up Collins Streets and walked through the gardens at Carlton admiring the lush greenery and bright blooms. Lulled into peaceful serenity by the azure sky and fluffy clouds, families having fun, and tourists snapping selfies.

We shared pleasantries and the promise of a wonderful day catching up and enjoying the exhibition.

The 138-year-old Exhibition Building a new venue for Stitches & Craft but a magnificent setting. Cate and I had last visited here when some of her work was shown at the quilting show.

The Exhibition Building feeds my love of history and depending which entrance used, I learn something new every time – like this snippet of history and the monument I’ve dubbed ‘the protest sculpture’.

I’m sure the debate of the day mirrored many we still have about imports being favoured over local products but how many of our current MPs would put their money where their mouth is like the Hon. John Woods? 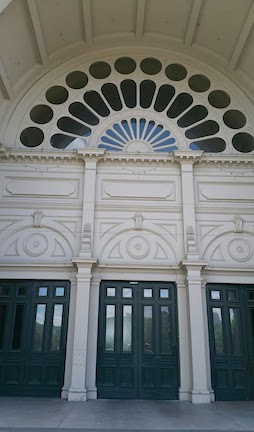 When we rounded the corner, we were relaxed and comfortable – and surprised the entrance silent and deserted.

The beautifully carved doors shut tight and no huffing, puffing or pushing or whispering magic words like ‘open sesame‘ made a bit of difference.

We met a couple of young women who were also confused. At first, I thought they were just admiring the architecture but then discovered they were itching to stitch and craft…

Cate, who is more computer savvy than me quickly Googled.

The venue correct – the date wrong. ‘It’s next weekend...’

The girls looked crushed. The surrounding water from fountain and lake a metaphor for tears. 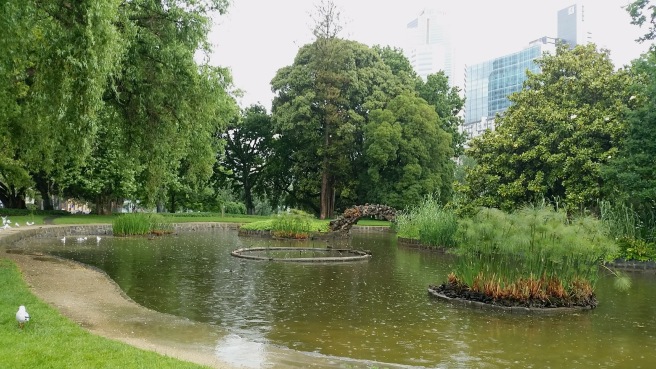 We just felt a little like ‘Dumber and Dumbest,’ but recovered instantly. After all, we were standing beside another fantastic venue and reading the advertising signs, the Victorian Museum offered several new exhibits, as well as the bonus cafe.

Within moments we had cloakroomed Cate’s bag, and clutching entry tickets we enjoyed a cuppa before wandering through what must be one of the most delightful, airy museums in Australia.

I appreciate the improvement more than most because in 1974  I was a research assistant attached to the library at the museum when it was housed in Russell Street.

The modern layout and approach to exhibits and the knowledge shared absolutely amazing compared to the archaic and ancient displays of the dark, drafty building where I used to work.

On the first floor as you walk along feast your eyes on The Federation Tapestry designed and made by the Victorian Tapestry Workshop to mark the centenary of Australia’s birth as a nation.

Murray Walker, the principal artist/designer, collaborated with more than 20 artists to develop the tapestry around the theme “One People, united in peace“.

There is a short video that tells the story of how 24 weavers worked an estimated 20,000 hours to create the 10 panels. It was woven at the Victorian Tapestry Workshop in Melbourne 2000-2001.

The tapestry presents some of the great themes of the Australian story: dispossession, settlement, adaptation, the land, celebration, hope.

The artists set out to trigger memories and inspire reflection about the future of our land and as a writing teacher, I know students could spend hours here using the various frames for inspiration.

My favourite has to be the drawings and words from indigenous children and their aspirations for the future:

The talent and cleverness of the artists and weavers truly a wonder to behold.

Women Of The Land

A collaboration between the Invisible Farmer Project and Her Place Women’s Museum Australia celebrates rural women who work, protect and heal the land.

We farm to feed those we love and our communities. Within my community, I have an amazing tribe of women that I surround myself with. They’re the ones that buoy me in times of need and celebrate with me. Women supporting one another is a primal and magical thing.

The Invisible Farmer Project acknowledges and records the diverse, innovative and vital role of Australian women in agriculture. The project involves a national partnership between rural communities, academics, government and cultural organisations.

Launched this year in March, several of the stories feature in a mini exhibition, along with artefacts like one participant’s hat, which embodies the important role she played in leading farming communities and rural organisations.

There is great detail about the first four women interviewed for the project and more information  can be found at invisiblefarmer.net.au

What an invaluable resource for any writer researching contemporary Australia’s female farmers! And the stories a wonderful learning tool for us all, whether we need to use the information or not because the project aims to:

A Gathering was held for women on farms and I snapped Cate appreciating the sewing and design of the squares making up a commemorative banner of those organisations that participated. 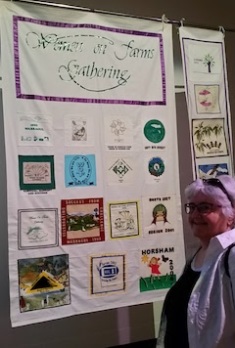 Her Place celebrates the social, civic, and entrepreneurial achievements of Australian women and their role in shaping our nation. Three exhibitions have been curated this year to tour regional and metropolitan Victoria.

Her Place is still working towards the creation of a permanent public space that will collect and preserve women’s records and archives so that the distinctive achievements and contributions of women can be acknowledged and written into history.

(As opposed to herstory being ignored for centuries!)

Four Victorian women strongly bound to the land are honoured. You can listen to them tell their story about living and being committed to the land and their communities, as well as enjoy a display of personal artefacts: 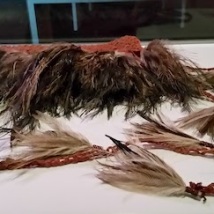 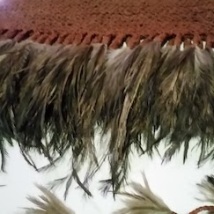 Lunchtime came and went and we could easily have spent all day appreciating what makes Melbourne marvellous in an exhibition that allows you to meander through replicas of arcades and streets of inner Melbourne of the past. 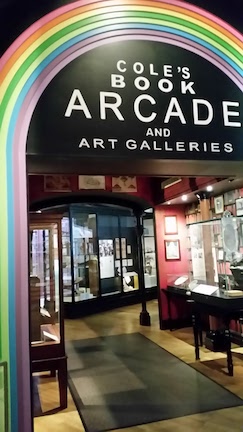 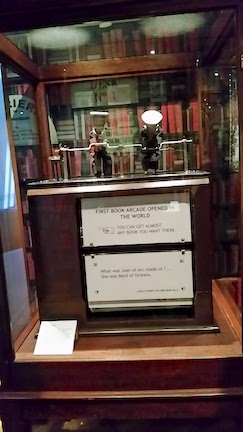 I have a little book somewhere bought from Cole’s Book Arcade and can remember being fascinated by the shop. 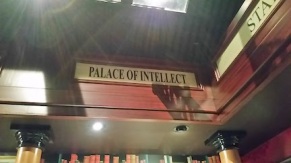 Well done to the researchers and writers for all the information made available to the general public and presented in such palatable chunks. Thanks too must go to the designers, tradies and staff who helped create delightful exhibits. 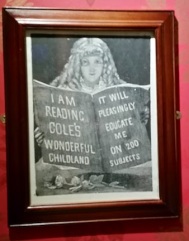 Cate and I decided to head down to the city but found ourselves trapped in the foyer waiting for a very heavy downpour of rain to subside.

The marine creature display apt – even to the look of surprise or is it excitement on the shark’s face? And yes, there were people getting soaked voluntarily so they could take photographs.

One little boy ignored the thunder and had a great time splashing in puddles! 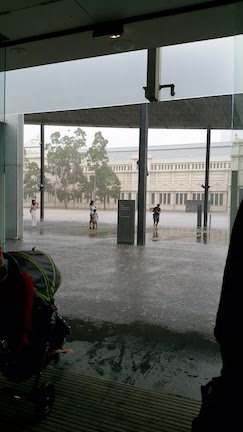 Who will be the first to drown seemed the
challenge from the heavens as clouds exploded
and torrential rain cascaded down.
‘Not me,’ said everyone with umbrellas held high
‘Nor me,’ said others huddled inside, and dry.

Thunder roared and growled –
was that a lightning flash?
Braving the downpour, some people
made a dash – finding cover in bus shelters
snuggled close to strangers – while others
recklessly crossed streets ignoring dangers.

‘Any port in a storm’ a cliche so true
as doorways and porches became home
for much more than a few.
Downpipes sagged and gushed
collapsed under watery weight –
surging water made rivers of roads and
too much rain meant every tram late!

Soaked, sodden, and shivering
commuters crowd tram, train and bus
meteorological or seasonal confusion –
‘It’s Melbourne and no surprise, to us.’

‘I truly don’t care,’ cries the inner child with glee
‘splashing in puddles looks really good to me!’

Despite the rain, we managed to get to Spencer Street and catch a train home.

‘I really enjoyed myself,’ said Cate.

‘Me too,’ I said and quoted Dad’s favourite poet Rabbie Burns, ‘The best-laid schemes … Gang aft a-gley…’ before adding, ‘ but our day was rainbow and never grey!’