On Thursday night, I attended Underground, a play at the Shirley Burke Theatre, Parkdale – a great venue within walking distance of my home in Mordialloc, but also opposite the Parkdale Railway Station.

When I arrived home, I couldn’t wait to share the experience with my daughter.

‘What a wonderful evening! It made me glad to be a writer – so inspiring. An original interpretation… makes me want to write… keep trying different ways of telling great stories!’

Yes, I’ve reached the stage where if I don’t like a play or film, or a book, I don’t force myself to see it through to the end and a couple of months ago, my friend Lisa and I walked out of the same theatre at the interval.  We preferred sharing a coffee and chatting to returning for the second half!

‘Indeed,’ I answered, ‘but… this production was clever, well-acted, and focused. A fantastic retelling of a powerful story about a truly heroic and intriguing woman – who so many people don’t know anything about – you included!’

With my own writing in the doldrums, it was a change to feel happy and invigorated about writing. I wanted to talk about the story, the production, presentation, the acting, the stagecraft …

There is a wonderful feeling of elation when you watch a play or a film and it affects you that way. Just like the satisfaction of finishing a good book or short story.

You relish the experience, wish it hadn’t ended, want to prolong the ideas, emotions, and memories stirred. You’re ready for a discussion or to revisit a second show, a replay or reread.

There is no mystery as to why book clubs, and film and theatre appreciation groups thrive.

I missed out getting a copy of the programme – they ran out – but the lady next to me retrieved her folded copy from her bag and I snapped a shot with my phone camera.

The eclectic list of supporters thanked is interesting and indicative of the importance of this work in the wider community as well as the art world.

Nancy Wake (1912-2011), now as The White Mouse (die Weisse Maus) left Sydney for Paris at eighteen and became a celebrated WW2 spy. She was one of only thirteen female special agents to survive the war.

My interest in her story began in 2015 when I wrote the book and lyrics for a musical The White Mouse, licensed by DSP in Sydney. In 2017, I spent six months as a resident with a theatre company in Paris where my interest in the French resistance and the German Occupation of France reignited. During this time I wrote Underground.

I describe it as a hallucinatory view of Nancy’s life.

Nancy was never keen on anyone messing with her story and hated all films, TV series and almost everything that was ever written about her, so I doubt she’d like my play.

However, I hope the small grains of truth contained within this fictionalised drama illuminate her complexity. Nancy Wake was (and still is) often referred to as a ‘difficult woman’.

She was not recognised for her efforts during WW2 in Australia until very late in her long life, despite her bravery and the admiration of the French for her contribution to their Resistance and subsequent Liberation.

In a culture where we are finally beginning to recognise women for what they do rather than how they look or behave, I feel Underground has something to say.

The above portrait is a rare picture of Nancy wearing some of the honours she received:

Underground has a lot to say and the execution by superb actors – especially Margot Knight – was impressive.

The technique of having an aged Nancy reflect on her life just before another ceremony lauding her war service, and having other actors portray the flashbacks on stage, sometimes with the older Nancy interacting, worked extremely well.

Margot Knight stayed in character throughout – her slower movements, facial expressions and word delivery never faltered. She was Nancy!  Her memories a bit addled from age, grief, and her love of Gin, but with such clear and believable delivery.

Nancy Wake was in her 99th year when she died. Her life before, during, and after the war could fill volumes.

Christine Croyden’s attempt to capture the essence of this complicated human being deserves high praise.

The ‘White Mouse’ helped countless people escape death and torture in Occupied France. On the Nazi’s ‘Most Wanted’ list she earned the moniker White Mouse because of her elusiveness. after effective operations against the enemy.

When she managed to escape to England she trained as a spy and was parachuted back into danger despite knowing the consequences if she was caught. Her French husband, Henri was tortured and murdered by the Nazis.

Nancy earned the reputation of being strong mentally, physically and emotionally – legend has her killing a man with her bare hands and executing a German agent by shooting her in the back of the head.

Underground tells us the highlights of Nancy’s life focusing mainly on the WW2 era and the drama is enhanced by song and choreography.

The story of Nancy Wake’s exploits as spy and hero are well-documented with several online links containing excellent detail. There is some repetition and the usual discrepancies regarding dates and other information because most of the articles reflect the paucity of resources available.

Everyone agrees that for a very long time Nancy Wake was ignored/neglected in a way no male war hero ever suffered.

Nancy Wake, A larrikin and a hero: http://www.convictcreations.com/history/nancywake.htm

My Mother was a huge fan of telling the stories of women’s contribution because she felt ‘herstory’ important. It was Mum who bought me a book on Joan of Arc, The Maid of France, the French author Collette and Nancy’s book which was first released in the 1980s. Mum encouraged me to read widely and seek the untold or rarely told stories. 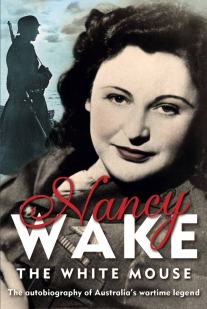 I read the autobiography and later when studying at university, bought a biography written in 1956 about Nancy by Russell Braddon who had been a POW of the Japanese. A prolific author, he suffered a mental breakdown several years after the war, which doctors attributed to his war experiences.

The effect of trauma and the horrendous violence people witness and become part of during a war and how it may change your attitude and personality, and most certainly your outlook on life is explored in Underground.

The stresses and effect of the journey of other characters and their relationships with Nancy included.

However, it is the price Nancy paid for her courage and persistence and the price she saved others from paying that you think about long after the play is over.

There was a TV series starring the brilliant Noni Hazelhurst as Nancy a few years ago too and a couple of documentaries worth following up.

Why Do We Do What We Do?

That question of WHY concerning human behaviour is difficult to answer and because all of us are complex with varying degrees of experiences, different backgrounds and perspectives with various wants and needs, it is an eternal conundrum to be explored.

The ‘human condition’ a topic most writers of every genre are drawn to explore.

To dissect, and attempt to understand… Scottish poet, Rabbie Burns said, ‘the moving why they do it‘… It may be an unanswerable question.

… To step aside is human:

One point must still be greatly dark,

The moving Why they do it;

And just as lamely can ye mark,

How far perhaps they rue it…

from Address to the Unco Guid, or the Rigidly Righteous by Robert Burns

Christine Croyden has succeeded in tackling that bastion of male stories – heroism during wartime, with Underground. Succeeded shedding a little light on the motivation of Nancy Wake and her legacy.

The Allied authorities acknowledged Nancy’s exuberant spirits and physical daring but thought she was just ‘good for morale’ whereas the men and women on the ground who saw her in action formed a different opinion.

“She is the most feminine woman I know until the fighting starts. Then she is like five men.”

one of Nancy’s WW2 comrades she Captained

It is a contemporary play with a powerful beginning which gives a nod to Nancy’s New Zealand roots when the aged Nancy performs the Māori haka – a memorable visual feast.

A creative way of declaring her birthplace and links to a proud warrior race plus the profound links between Australia and New Zealand through the commemoration of ANZAC.

Nancy’s pre-war career as a journalist is used to good effect too and employing poetic licence we hear Nancy describe the horrific events of the 1938 Kristallnacht while recounting her experience of going to Vienna in 1933 to interview Adolph Hitler.

Nancy witnessed the ill-treatment of the Jewish population and the emotional rendition by Margot Knight leaves you in no doubt why Nancy dedicated her life to fighting the Nazis.

The playwright has drawn on all the available information but Margot Knight gives us insight into the horror’s effect on a young Nancy who wrote about her visit to Vienna.

“The stormtroopers had tied the Jewish people up to massive wheels. They were rolling the wheels along, and the stormtroopers were whipping the Jews. I stood there and thought, ‘I don’t know what I’ll do about it, but if I can do anything one day, I’ll do it.’ And I always had that picture in my mind, all through the war.”

Nancy Wake went on to become the Allies’ most decorated servicewoman, eventually collecting bravery awards from France, England, Australia and the United States.

In answer to being overlooked, she said of Australian authorities, ‘they can stick their award and be thankful it’s not a pineapple’.

Australia was slow to acknowledge her contribution but New Zealand is still to officially acknowledge their ‘daughter’ despite the efforts of a relative Professor Graeme Wake.

Professor Wake who met up with Nancy in 1990 said:

She never lived much of her life in New Zealand and left as a small child, when she was taken by her parents to Australia and hardly came back…

She was a forthright person, very direct on her views, clear on her views.  You knew exactly where you stood with her… a toughness of spirit which you can only admire.

So Many Stories Still to be Told

‘I hate wars and violence, but if they come I don’t see why we women should just wave our men a proud goodbye and then knit them balaclavas.’

‘I got away with blue murder and loved every minute of it.’

She is also reported to have said she hoped to go down in history as the woman who turned down 7,000 sex-starved Frenchmen!

Perhaps her personality and attitude came from a tough early life when her journalist father returned to New Zealand deserting his wife and six children.

She was certainly no shrinking violet or demure lady often portrayed as the norm.

Nancy was a nurse in Australia during the early 1930s but harboured dreams of a different life and when she inherited money from an aunt left for Europe as soon as could be arranged.

What would her life have been like if no world war?

Underground is a great play but it sparks interest and shines a light on a host of other stories deserving to be told about Nancy and many others from that era.

The play is an inspiration for telling stories in an entertaining and memorable way and I hope it returns to Kingston and more people take the opportunity to see it.