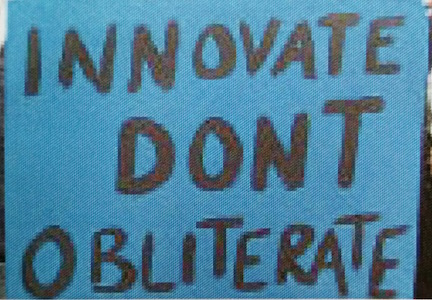 In response to the government initiated CSIRO cuts, which will result in almost 100 local climate researchers losing their jobs as part of a nationwide cull of 350 jobs, I attended a forum organised by Mark Dreyfus QC MP.

Over 200 people crowded into the hall at Aspendale Primary School on Tuesday evening, March 22, and it was heartening to feel the energy in the room and to know so many people cared about the issue because as Mark explained, in the electorate of Isaacs an 80cm rise in sea-level will devastate 9,500 homes.

I’ve lived in Mordialloc for 32 years and like many living bayside I’m forever conscious of the fragility of our environment: erosion of cliffs and sand dunes, the need for the perpetual replacement of sand on some of the beaches, the close proximity of the water table and propensity to flood, importance of the wetlands for bird migration and propagation, history of the swamps and flooding in certain areas.

Now of course with the reality of climate change there will be other stories to write as we see our world change. And change it must according to the CSIRO Marine and Atmospheric Research Centre in Aspendale, one of the most important carbon research centres in the world. 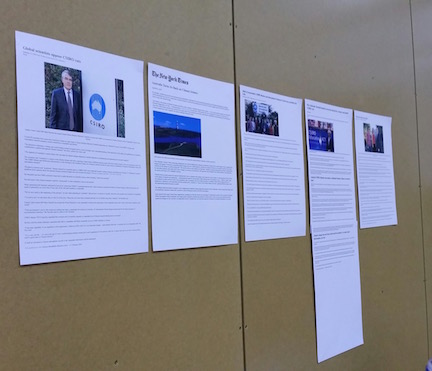 Copies of newspaper articles were shared at the meeting revealing how the scientists in Aspendale have been responsible for some of the most significant findings in climate change research in the past 50 years. These job losses have caused outrage and dismay  throughout the world even attracting stern criticism in the editorial of The New York Times.

Meaningful scientific research takes years: painstaking and methodical, it must be thorough and consistent. In the CSIRO’s Southern Slopes Cluster Report 2015 climate change is:

A change in the state of the climate that can be identified (e.g. by statistical tests) by changes in the mean and/or variability of its properties, and that persists for an extended period of time, typically decades or longer.

The same report predicts with ‘very high confidence’ a continued increase in sea level with the rate of rise in the 21st century larger than the average rate during the 20th century as ‘radiative forcing from greenhouse gas emissions continues to grow.’

For 25 years the scientists at Aspendale have  monitored sea levels and changes in the Pacific Island region helping the island communities be forewarned and forearmed to cope with the devastation that is already happening. The CSIRO part of the answer whereas our current Federal Government “leaders” choose to joke about the threat to our neighbours.

For decades, Australia has run the most advanced and comprehensive atmosphere and ocean monitoring programs in the Southern Hemisphere, providing critical information not only for a nation that is already the driest on earth and fast getting drier, but also for a world in urgent need of such data to search for ways to cope with climate change.

Last month, to the dismay of climate scientists around the world, Australia’s federally financed science agency — the Commonwealth Scientific and Industrial Research Organization, or CSIRO— announced plans to shift its focus to commercially viable projects and cut or reassign 350 researchers. The decision, as more than 3,000 climate scientists have declared in an open letter to the Australian government, demonstrates a deplorable misunderstanding of the importance of basic research into what is arguably the greatest challenge facing the planet…

Long-term research on carbon dioxide levels in the atmosphere, and on changing ocean and weather processes, is essential to learn what lies ahead and how to prepare for it. Moreover, as the open letter from the scientists put it, Australia is a “canary in the climate change coal mine,” spanning different climate zones and experiencing steady decreases in rainfall.

The cutbacks could also obstruct Australia’s role in supporting the landmark climate agreement reached in Paris in December, which, among other things, calls on scientifically advanced countries like Australia to assist developing countries with advice and support.

Many people thought ridiculous decisions were going to change when climate change denier Tony Abbott was deposed as Prime Minister, but it seems for Malcolm Turnbull the prize was the title not the responsibility.

Each speaker at the forum condemned the Federal Government for not opposing the cuts  but also the starving of funds to the CSIRO for many areas of critical research. A rally in support and to save the hundreds of jobs is organised for Saturday April 2.

The World Meteorological Organisation earlier this week said “Australia will find itself isolated from the community of nations and researchers devoting serious attention to climate change” if the key research programs were lost.

And the Political gets Personal

As if to emphasise the importance of climate change research and the effect global warming is already having on our community, I spent this Easter removing a dead tree from the back garden.  The tree succumbed to El Nino‘s initiated drought, heatwaves and an unseasonal storm we suffered recently, fortuitously crashing down behind the shed and not on it! 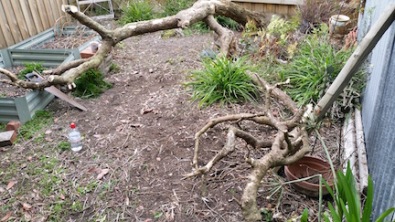 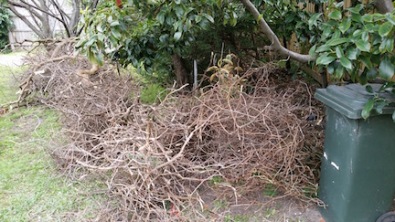 “We abuse the land because we regard it as a commodity belonging to us. When we see land as a community to which we belong, we may begin to use it with love and respect.”

In 2009, I attended the Melbourne festival of Ideas at Melbourne University where novelist Kate Grenville was the keynote speaker on Artists, Writers and Climate Change. Kate and other writers discussed and debated how writers could use their words and ideas to encourage deeper thought on environmental issues, or even if they should!

We all know what we could be doing to help the environment. We could install solar panels, or drive hybrid cars, or use fewer plastic bags. But there’s often a big gap between what we know we should do, and how we actually behave.

Kate Grenville argued that it is the role of artists and writers to inspire and move people to act on important issues like climate change. She spoke about the way art and literature excites a response in us and the role that plays in understanding ourselves.

As someone who thinks deeply about many issues and has a passion for words and writing I have never been in doubt about expressing how I feel. If  my writing is considered to be a ‘political message’ so be it. Some issues are too urgent for subtlety!

Here is a poem, Pollute and Perish, from my second book More Small Talk, poems for children, 1995:

He shovels a healthy salad
into bearded mouth
his bamboo fork environmentally friendly –
but not the plastic container…
She swigs Kamboucha
for inner health
What about Mother Earth’s digestive tract?
Blocked by the plastic bottle and cap.
Fast food aromas embedded
in train carriage upholstery
waft in the air, cling to clothes.
Junk food litter clutters floor
peeks from discarded plastic bags…
Excess packaging the norm
as the world chokes
and even those who profess care sucked in
and swallowed by consumerism
Land fill dumps grow garbage
litter

muck
There is no ‘away’ in throw! 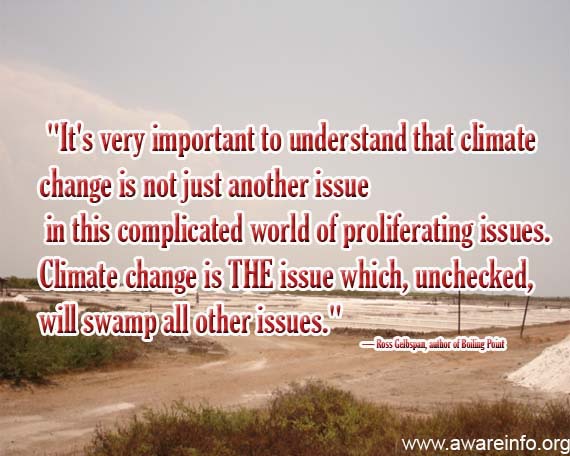 The day is calm. Tranquil. A great-to-be-alive day. The scent of eucalypts and pine compete with salty air and whiffs of abandoned seaweed.
The cyan sea a mirror for whipped cream clouds. Dainty dollops on a baby blue plate. Gulls sit or glide atop the glassy surface. Bathed in brilliant white sunlight I imagine I too float and dream.
But in the distance, palm tree fronds tremble casting lacy shadows on hot sand. The clink of moorings and creak of masts drifts from the creek and a sudden gust of wind whips sand to sting my legs and face. Airborne seagulls now screeching origami kites.
A dark veil unfurls from the horizon shattering the steel blue mirror swallowing the fluffy clouds.
Peaceful contemplation disappears, waves soap around my feet, slap at ankles, sunlight fades. I retreat to the shelter of groaning eucalypts and pine, the taste of salt bittersweet. 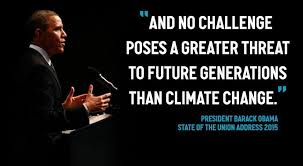 Mother Earth, I’m referring to
The mountains, snows, and sea
The seasons, soil, and sunlight
Providing sustenance for you and me

But Mother Earth is terminally ill
Man has definitely not been kind
We’ve raped, polluted and poisoned
For wealth we craved to find

Climate deniers knuckle draggers
As are those mouthing ‘innovation’
Drought, bushfires, failed crops
The word should be desperation!

The time for procrastination gone
Also the sand for burying your head
Earth’s lungs struggle daily to breathe
How long before humanity is dead?