Winter isn’t supposed to start until June in Australia, but yesterday and today in Mordialloc, after torrential rain most of the night, we woke to a decidedly, wintry chill.

When I opened the door to take Josie for her walk, a cold blast of wind from the sea had collected the temperature from the South Pole and Josie gave me a look that said, ah, now I know why you put that coat on! 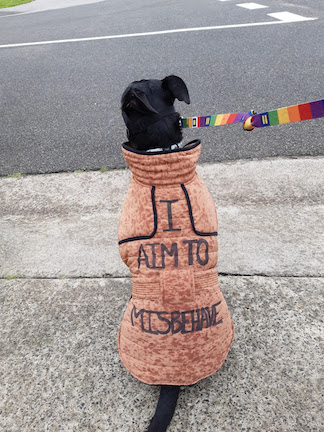 For those who don’t know, Melbourne has a reputation of ‘four seasons in the one day‘ so this quick turnaround in the weather (temperatures dropping from low 20s to 8 degrees) doesn’t really come as a surprise.

However, it is still autumn and I’ve always advised overseas friends to visit Melbourne in autumn, the season when I think the city looks its best. Here’s hoping the icy blast is an aberration and not the future because of climate change, the other catastrophe we face along with COVID 19!

Other parts of the world are heralding spring and as I discovered when I visited Siberia in April 2017, there are places where winter lingers longer than others.

And if you live in the Pacific Islands, summer seems to last all year. Here is the survival kit I advise everybody to have when they visit Samoa like I did! 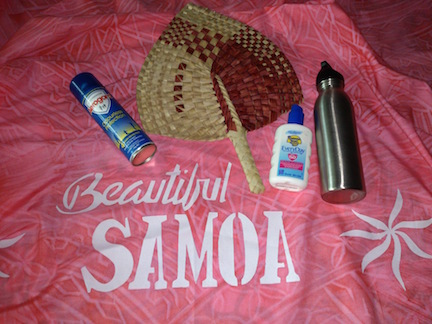 No matter where you live you can write about the seasons and if you have been lucky enough to travel there is the added material of comparison and maybe even the awe factor depending on where and when you travelled.

Look at any photographs to jog your memory and help add colour and authenticity to your stories if you describe what you see.

Some countries specialise in having breathtaking seasons like Cherry Blossom time in Japan, where I was fortunate to visit in 1984. Here is a short piece about the trip. cherry blossom time by Mairi Neil

I also wrote some haiku after the visit – that’s almost compulsory!

Tranquil and silent
old men hushed
as blossoms on ground

Here is an effort I wrote in class a few years ago The Luck of The Irish by Mairi Neil.

Choose a group of words and write a story, poem, anecdote – set a time limit of 10-20 minutes – this would be the average writing time in a class. You can change the form of the word but try and include them all.

Remember – leave your writing for a day or two and then reread, edit, rewrite:)

In dewy meadow, Spring flowers bright
buttercups bloom, a magnificent sight
while strolling upon this carpet of gold
a test is remembered from days of old
a yellow flower waved under the chin
do you like butter, we asked with a grin.

In dewy meadow, under strong Summer sun
childhood revisited as we have some fun
clumps of wild daisies smile up at me
their perfect white petals fluttering free
a bunch of daisies transformed with love
necklace and bracelet feather soft as a dove

In dewy meadow, Autumn leaves fall
dandelions transform into puffballs
with gentle breaths, we blow and blow
discovering Time as spores drift like snow
one o’clock, two o’clock –– maybe three
until naked stem is all we can see.

In dewy meadow, Winter walks are brisk
the puddles ice over putting feet at risk
I spy a toddler wearing bright rubber boots
splashing in puddles, not giving two hoots
a flashback to childhood appears in the rain
it’s worth wet socks to feel carefree again.

How many Seasons Are There? Does Australia Have More Than Four?

In 2014, Dr Tim Entwisle, the director of Melbourne’s Royal Botanic Gardens wrote a book called, Sprinter and Sprummer challenging the traditional four seasons, and encouraging Australians to think about how we view changes in our natural world. He said, since 1788, Australia has carried the yoke of four European seasons that make no sense in most parts of the country.

When he was on the ABC to explain his book and ideas he stirred up interest, support, antagonism and fascination. Many people agreed with the author that the reality for Australia is many more seasons than the traditional four but few liked Sprinter and Sprummer as names!

Living in Sydney, London and now Melbourne, I’m convinced that the four traditional seasons don’t make sense in Australia. My proposal is that we instead have five seasons based on the climatic and biological cycles we observe around us.

… minutes, hours, days and months are the way we organise our lives—sowing crops, attending job interviews, picking up kids from child care, playing footy, getting our hair cut and so on. Seasons are for noting, celebrating and tracking the changes in the world around us. If we get them wrong we don’t lose our crop, job or children.

It’s a tweaking of the current system. The familiar anchors, summer and winter, are there, but the bits in between and the duration of the seasons are adjusted for the southern Australian climate…

We could embrace one of the Aboriginal seasonal systems, but I fear this might be just too radical for most Australians (who, contrary to popular belief, are a rather conservative people)…

Then there is climate change and the fact that the seasons are changing, whether we like it or not. Perhaps we need an evolving system of seasons. However, we should at least get it right in the first place and try to reflect, if not our specific region, then large sections of the country.

There are no perfect or correct seasons. I am happy for my system to be rigorously debated and tested, and I would be thrilled if, through more people observing and monitoring the natural world, I have to totally redesign it.

In the South West of WA – there are some widely acknowledged Noongar Seasons which correspond well with what is suggested in the article.

People in Melbourne should also visit the Indigenous Garden and Forest display at the museum (after lockdown is over) and learn what our indigenous people call the seasons – and there are more than the arbitrary four we cling to, although I have devoted past posts to writing about winter.

There will be plenty of creative writing around coping with COVID19 and speculation as to how the world coped with the global crisis.

Writers draw inspiration from observing the world, people, situations, politics, trends – we are all opinionated! Sometimes it is good to let your thoughts marinate and have the benefit of hindsight or reflection.

Most people are worried about the next few months but many are also planning the shape of the world’s recuperation and recovery: 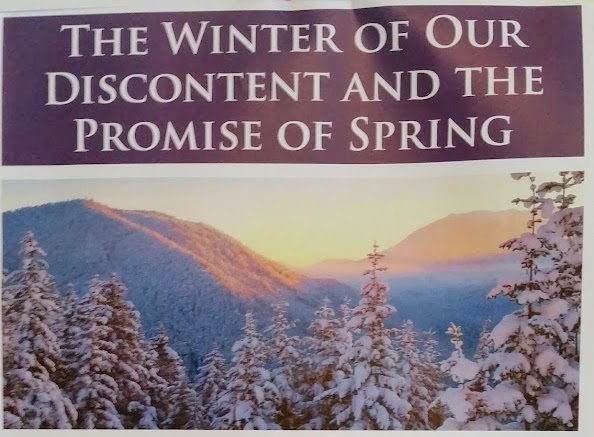 For some the change of seasons
can be bitter chocolate…
Autumn succumbs to winter,
days darken like spiced cider
and blackened bark,
heralding winter’s deadly cull,
lauding lifeless landscapes.

And a tiny shoot springs to life.

Hope is the quality of character that sustains belief under seemingly impossible situations – when kindness seems impossible or poverty inevitable or when the world seems cruel and life unbearable.

People encounter sources of hope in the imagination, in the words and examples of others, and in witness to the natural wonders around us every day.

Hope does not extinguish suffering but sustains the belief that there can be an end to it, if not in your own life, then in the future. And so hope propels you into action.

Here is a short story Spring has Sprung by Mairi Neil

And just because it has been so wet this weekend, here’s a reminder we are a country of ‘drought and flooding rains’ with a poem and a piece of flash fiction written in class splurge time A Roof Over One’s Head by Mairi Neil

Who will be the first to drown
from the heavens challenge
of a waterfall tumbling down?
‘Not me,’ said those with umbrellas held high
‘Nor me,’ said others huddled inside and dry.

Thunder roared and growled –
was that a lightning flash?
People braved the downpour
and made a dash – for bus shelters
snuggled close to strangers – others
crossed streets ignoring dangers.

Any port in a storm a cliche true
doorways and porches home
for more than drenched few
downpipes sagged and gushed
collapsed under watery weight
surging water made rivers of roads
scheduled transport cancelled or late.

Soaked, sodden, and shivering
commuters crowd tram, train and bus
meteorological or seasonal confusion?
No, – it’s Melbourne – no need to fuss.
Who cares? cries the inner child with glee  –
splashing in puddles looks fun to me! 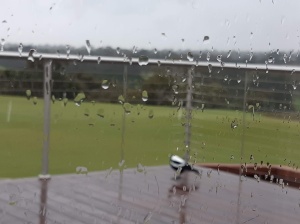 4 thoughts on “Seasonal Changes Can Inspire Us All To Write”