Before I write about another fabulous weekend in Bendigo, I acknowledge the Bendigo region of central Victoria is Djadjawurrung or Dja Dja Wurrung Country and recognise the unique relationship of Dja Dja Wurrung People to their traditional Country and pay my respects to their elders past and present.

A good way to learn about the region’s First People is to take a vintage tram ride on the Dja Dja Wurrung Tram – a moving celebration of their cultural heritage that navigates the past and present of the changing environment since colonisation.

For the second year, the City of Greater Bendigo opened its doors and partnered with Open House Melbourne to host Open House Bendigo on the last weekend in October. Supporting partners were Creative Victoria, DELWP, Heritage Council of Victoria and the La Trobe Art Institute. 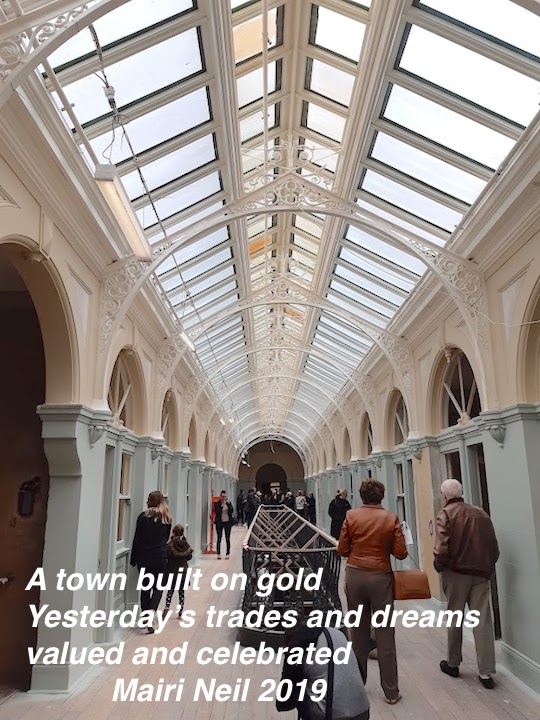 I was thrilled to volunteer again because Bendigo is a place you can easily fall in love with and being part of a volunteer crew hosting a building for Open House, I indulge my love of history and heritage and chat with a host of interesting people sharing a similar love or just satisfying their curiosity about buildings they pass every day or had a connection to in the past …

Whatever the reason, the air comes alive with stories, characters and settings and for a writer – to paraphrase our PM –  How good is an Open House weekend!?

In a thank-you email received yesterday (and the wonderful crew who run Open House nurture and always thank the volunteers!) the statistics have been collated:

The cooperation and enthusiasm of building managers, owners and architects also make the program possible and local volunteers from a variety of community or educational organisations keen to showcase on this extremely busy weekend for Bendigo.

There is an annual Cycling Classic plus a Sustainable Living festival and lots of cross-pollination between events. I even paused to enjoy the excitement of one of the cycling heats: 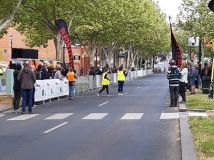 Bendigo is only 90 minutes by train from Melbourne and although the weather wasn’t as pleasant as last year visitors were not deterred and not only the Beehive Complex saw increased numbers.

People queued patiently outside and inside the building to be allowed a walkthrough of half an hour – 15 minutes downstairs and 15 minutes upstairs and volunteers kept the numbers moving by ensuring the time limit strictly adhered to.

My teaching voice came in handy as I herded those on the upper floor, as did the timer on my mobile phone and the response from a good-natured crowd. 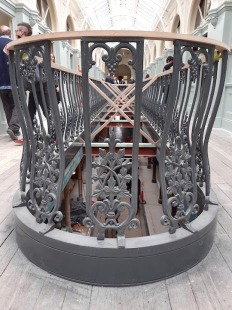 Why was the Beehive so busy?

The Beehive Building is a Bendigo landmark and dates back to 1872 when it was the Bendigo Mining Exchange. The building has been through many manifestations since then and therefore holds a variety of memories for the people of Bendigo.

Last year, Open House Bendigo allowed access to the construction site and the interest generated resulted in queues wending around the streets with waiting times of more than two hours – hence the timed viewing and entry this year!

The exclusive ‘sneak peek’ of  ‘never-before-seen restorative works’ and the opportunity to hear from the Developer, Craig Lightfoot, a golden opportunity few locals wanted to miss.

I’ll own up to being critical of many building developers, especially those who seem to want to get rich quick and bulldoze and build rather than restore and redeem but after meeting Craig and seeing the efforts to beautifully restore the Beehive to its former glory  I could become a fangirl!

In many of the rooms, you will see traces of past occupiers – paintwork, wallpaper patterns, ornamental plaster, brickwork, fireplaces…

Similar in style to Melbourne’s Royal Arcade and by the same designer, Charles Webb, the building’s original uses include a hotel, a mining exchange, a restaurant, offices and function space. The current development uncovers the rich layers of use by removing most of, if not all of the 1920s’ and 1950s’ changes, revealing key features of the original building. Visitors had access to the ground level construction site during the 2018 Open House Bendigo program, and this year visitors will access the newly completed arcade including the second story, revealing the intricate beauty of the glass ceiling not seen for decades.

Behind a still-to-be renovated staircase there will be a quirky memento.  Workers have written their name and date they worked on the building, the earliest entry legible is 1939.

Craig assured me he’ll be adding his signature to the wall and that piece of plaster will be made stable and remain as is!

He laughed when I said his commitment to retaining so many historical details reminded me of Kevin Mc Cloud closing many of the episodes of Grand Designs with praise for the builders who retained the ‘autobiographical details’ of a building! 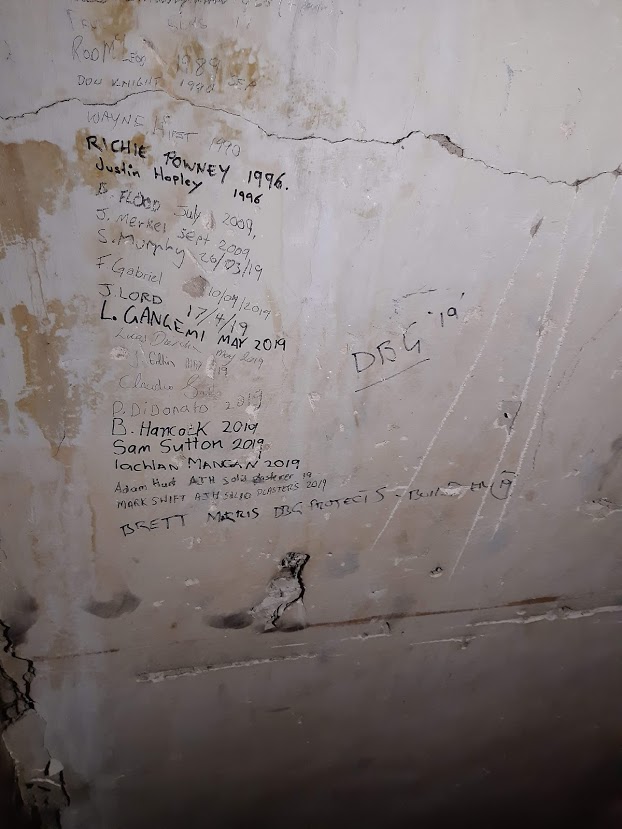 The Beehive Project has been several years in the making and started five years ago. After four years of planning,  lots of compliance hoops had to be jumped: Heritage Victoria, CFA building regulations and health and safety issues as well as local building regulations. Times and expectations have changed since 1870.

My post about the restoration of Flinders Street Station provides more detail of what is required by Heritage Victoria.

To ensure disability access, a lift will be installed, modern toilet and plumbing, and most voids had to be removed because of health and safety requirements.  Craig managed to keep the centrepiece that gives those downstairs a view to the floor above and the magnificent glass ceiling by widening the walkway on either side.

To remind people the voids were once there he reversed the fill-in floorboards and although the centrepiece had to be narrowed,  the cast-iron railings remain, albeit they are replicas. Craig said the original railings were removed and sold off or are languishing somewhere in Bendigo.

Interestingly, one of the visitors told Craig for some of the original railings, he should check out Marlborough House in Wattle Street, Bendigo!

Craig duly noted the suggestion and added it to a list of snippets he’d gleaned since opening the building for the public to view. Never underestimate the value of local knowledge! 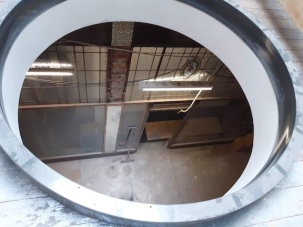 The building has had many reincarnations – Craig’s plans are for the food and beverage industry. A function centre, with retail and pub or cafe downstairs and intimate and cosy private dining rooms and two larger reception areas upstairs, ideal for weddings and other celebrations like corporate functions.

Coincidentally, both weekends I stayed in Bendigo for Open House, I witnessed a traditional wedding party posing for photos – this year the group was on the steps of the Art Gallery.

I hope Craig gets plenty of bookings and if the response from locals is an indication the building will get plenty of use, people love it and regard it as a Bendigo icon, pleased that it will once again be a place to visit. 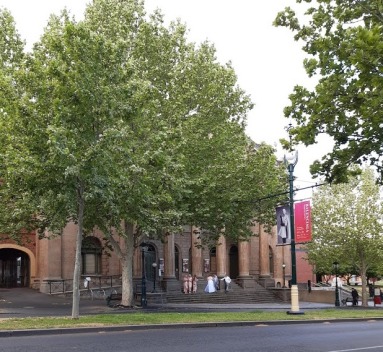 A young man dressed in typical tradie gear came through with his mum, grandad and other assorted family members. His first reaction was to retie a striped plastic ribbon cordoning off one of the no-go areas, ‘I’ll get into trouble if this isn’t tied tightly and people go in…’

‘If anyone cops criticism it should be me,’ I said, ‘ part of my job is to ensure people stay to designated areas and don’t go into rooms closed for safety reasons or because equipment and tools are stored.’

He took a bit of convincing from his mother and me that it was okay, it was not his responsibility and it was his day off!

I later saw him explaining to his family in great detail, how he stripped the old paint off, what he’d been instructed to leave, how he scraped, sanded and carefully applied new coats…

Careful, painstaking work, but often rewarded by treasures hidden beneath.

I’m sure he is learning a lot about past painting practices and the type of paint used.  Most paints were lead-based and not the healthiest of products so I’m glad he is taking health and safety seriously! 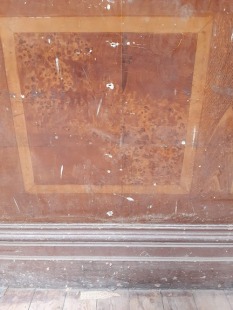 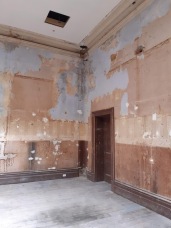 A Cat Through The Roof!

As mentioned, Craig was noting a lot of the stories people told him about how they interacted with the Beehive Buildings. He intends to have a ‘Story Wall’ or some kind of archive where people visiting can learn about the building’s past.

The builders have uncovered ‘historic gems’ and some of these discoveries were on display for Open House – artefacts as well as building features like previously boxed-in metal columns, hidden plaster arches and a steel strongroom door thought to have once blocked the public from gold stored on the premises. 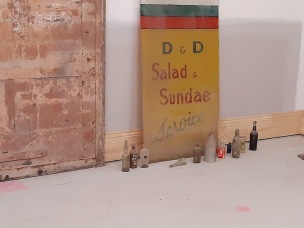 Last year, people got access to the ground floor, but this year they could venture upstairs and one story stands out – in fact, both Craig and I agreed we’d probably dream about it!

There was a staircase leading to ‘offices’ upstairs – the staircase where the tradies had left their marks.  People were curious:\ ‘what is up there?’, ‘what will it be?’ 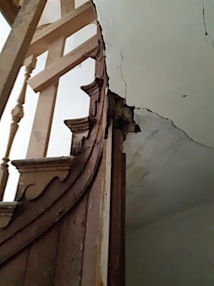 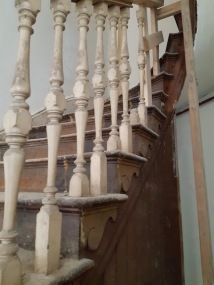 A lady said her Uncle Bob and Aunt Win Woods owned the Dad and Dave Cafe and ‘lived up those stairs.’

She became quite teary talking about them and remembering childhood visits when she was around 7 or 9 years old. She recalled Uncle Bob built a clothesline for his wife and placed an extended wooden walkway above the glass ceiling so she could walk out and hang her clothes.

One day, the Siamese cat that used to follow Aunt Win fell through the glass! How narrow and dangerous was that homemade path to the clothesline?

Craig and I both agreed we couldn’t get the image of a falling cat out of our mind and I kept having surreptitious peaks upwards until the end of my shift.

Perhaps the story influenced my reaction when a young mum carrying a baby leant over the cast-iron railings to stare below. Stomach lurching, I moved closer as the much-criticised scene of Michal Jackson dangling his son from the balcony flashed through my mind.

Thankfully, an anxious friend accompanying her spoke up and the young mum moved away. I didn’t have to declare my nervousness or fear of heights.

Another lady told the story of coming up the back stairs and into a shop to get her wedding dress made. The tailoress specialised in wedding dresses and discreet fittings. Craig has chosen to leave the etchings of past occupants on two of the upstairs columns and restore the various staircases.

I hope Craig meets his deadline for March 2020 and that Bendigo will be host to Open House again because I know where I’ll be going to have a cup of coffee or ice cream or just a wander through the restored arcade because as I’ve discovered curiosity does not kill the cat!