I couldn’t let this week pass without celebrating NAIDOC, especially since the message is such an important one for all Australians to heed.

We invite you to walk with us in a movement of the Australian people for a better future. The Indigenous voice of this country is over 65,000 plus years old.

They are the first words spoken on this continent. Languages that passed down lore, culture and knowledge for over millennia. They are precious to our nation.

It’s that Indigenous voice that includes know-how, practices, skills and innovations – found in a wide variety of contexts, such as agricultural, scientific, technical, ecological and medicinal fields, as well as biodiversity-related knowledge.  They are words connecting us to country, an understanding of country and of a people who are the oldest continuing culture on the planet.

And with 2019 being celebrated as the United Nations International Year of Indigenous Languages, it’s time for our knowledge to be heard through our voice.

For generations, we have sought recognition of our unique place in Australian history and society today. We need to be the architects of our lives and futures.

For generations, Aboriginal and Torres Strait Islander peoples have looked for significant and lasting change.

Voice. Treaty. Truth. were three key elements to the reforms set out in the Uluru Statement from the Heart. These reforms represent the unified position of First Nations Australians.

Unfortunately, because of circumstances beyond my control, I haven’t attended any events this year as in the past, but as I continue to organise the house in preparation for full retirement, I unearthed newspaper clippings and articles on various subjects, that I kept for research or out of interest.

Revisiting this treasure trove stirred a lot of memories of connection with Aboriginal and Torres Strait Islander peoples since my university days and involvement in the first Aboriginal Embassy, 1972.

It’s sobering to remember that it was only in 1975 that the one-day acknowledgement of National Aborigines Day became a week-long celebration with diverse activities to acknowledge our past, examine our present and hopefully look toward a better future.

Among the pile of paper, I must decide to scan or throw out, there are many book reviews, opinion pieces and essays written by Aboriginal and Torres Strait Islanders as well as academic or investigative reports by non-indigenous writers.

However, the realisation that there has been some progress made is tempered by the current Federal Government’s reluctance to consider a true voice in parliament for First Australians and its outright rejection of the Uluru Statement from the Heart.

Broaden Your Knowledge About Australia and Its History/Herstory

This is also the International Year of Indigenous Languages – a United Nations observance in 2019 with aims to raise awareness of the consequences of the endangerment of Indigenous languages across the world and to establish a link between language, development, peace, and reconciliation.

Please check out two blogs I follow for reviews of the work of current indigenous authors and plenty of other interesting information: Lisa Hill’s ANZ LitLovers LitBlog and Bill Holloway’s the Australian Legend.

Last year, I visited Canberra and the National Museum, which has some great exhibitions as a starting point for those seeking knowledge and understanding:

empathy, not sympathy; acceptance not tolerance.

At the entrance of the National Museum is a magnificent set of sculptures of the Bogong Moth, acknowledging the cultural traditions of the Aboriginal peoples who lived in the ACT prior to the European invasion and settlement. 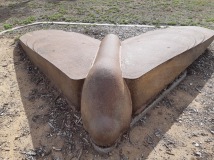 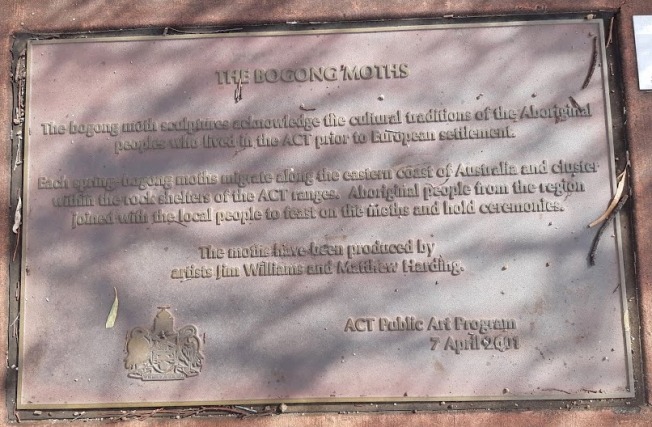 What do our First People mean by Country?

Almost every public ceremony at all levels of government now includes a ‘welcome to country’.  If you wonder why or don’t know how to explain it to visitors, an explanation follows.

Country’ is more than just the name of a place. When used by the Aboriginal people it is about a connection to all aspects of the land; landscape, ecology, spirituality, seasonal rhythms, people and culture.

For most of us, everything we read about our First People is either white/colonial/European perceptions of Aborigines or Aboriginal perceptions of themselves.

To read Aboriginal writing allows Aborigines to speak for themselves and state their view of Australian history.

In 2019, there is a wealth of Aboriginal writing to choose from including poets, creative writers, non-fiction and academia.

Albeit almost two decades ago, in his book, Writing from the Fringe: A Study of Modern Aboriginal Literature, Hyland House, Melbourne 1990, Mudrooroo Narogin divides Aboriginal history into five periods: 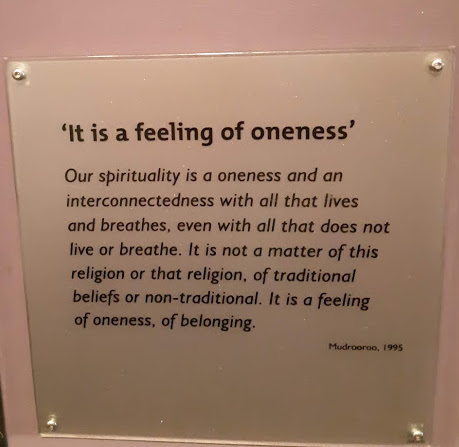 Evidence of early Aboriginal habitation of the continent includes bones uncovered at Lake Mungo in south-eastern Australia and the sites of volcanoes, such as those at Tower Hill, near Melbourne.

The oldest continuing culture in the world dates back 50,000 – 60,000 years depending on what archaeological discoveries you choose to focus on.

What we know now is that Aborigines comprised many language groups, each with their own country. They created a network of overland commerce, developed ingenious ways of finding water and food in deserts, were expert trappers and fishers, skilled herbalists and farmers with a hundred different plant foods to supplement a diet of meat, fish, eggs and insects.

Colonial Invasion Without a Treaty

From the late 18th century, British and other Europeans arrived on the shores of this continent, some willingly, others with no or little choice: – officers, soldiers and sailors of the Crown, convicted felons, free men and women searching for economic opportunity and a new life or fresh start.

They built towns on Aboriginal land tended and shaped over thousands of years and so began the Frontier Wars and decades of conflict over the sovereignty of the land.

There never was a treaty or proper recompense for the shameful land theft but hopefully, this will be rectified soon. At least the State of Victoria is working towards a treaty.

Aboriginal writers of note during the 1960s and 70s argued for Aboriginal land rights and self-determination. People like Oodgeroo Noonuccal (Kath Walker) and Kevin Gilbert brought an Aboriginal voice to wider audiences. Both of these wonderful poets died in 1993 – a tragic loss to Australian writing.

A newspaper clipping I have from The Sunday Herald, August 20, 1989, has a story by Brett Wright titled, Our Forgotten War. This challenges the lie that Aborigines didn’t fight for their country or were always the victims.

” John Lovett, Aboriginal Advisor and former elder of the  Kerrupjmara clan, surveys the stony ruins of a lost culture.

“This is one here,’ he says, standing in a ring of weathered rocks, barely discernible in a volcanic landscape strewn with boulders. Further afield, at the edge of a drained swamp known as Lake Gorrie, are the remains of stone fish traps, used to catch eels when the lake flooded.

Historians say the ruin is almost certainly the base camp of a group of Aboriginal guerrilla fighters who fought the squatters in the black version of Vietnam: the Eumeralla War of the 1840s.

Records show the resistance to white settlement was intense and bloody in Victoria’s Western District. The 1838-39 drought left the Aboriginals short of food and water, and they were forced to drive off the squatters.

In 1842, two clan leaders, Tarerarer and Tyoore, nicknamed Cocknose and Jupiter, led attacks on stations around Eumeralla River, near Macarthur. They attacked shepherds and took their sheep for food.

The Eumeralla War had begun. An unknown number of lives were lost on both sides, as the attack led to fierce reprisals by the settlers. One of the raiding parties from the Nillangundidji tribe numbered 150.

“The tactics used were very similar to those used by the Viet Cong in the Vietnam War,” Mr Lovett said.

… concentrating their attacks on settlers who had taken up land around sacred sites, the Lake Gorrie guerrillas were very successful… the campaign continued for two years until native police killed Jupiter and Cocknose. With the leaders gone, the resistance movement faded.

“What we were fighting for was to survive, to maintain and keep our traditional areas,” said Mr Lovett …(who) believe sites such as Lake Gorrie should be recognised. “It’s relevant for white and black people to know the history of Australia.’

Fast forward 20 years and a lot more truth about how the invasion and settlement of Australia played out debunks peddled myths that the Aborigines didn’t fight for their land or try and repel the invaders.

For more on Eumeralla and other Victorian sites of massacres and conflict check out this website on Australia’s Frontier Wars.

Wikipedia has more information specifically on Eumeralla and an article from The Sydney Morning Herald, August 10, 2013, A Forgotten war, A Haunted Land.

Perhaps the greatest lie that I was taught at school regarding Aborigines was that there were no Aborigines left in Tasmania after Trugannini died. The National Museum has a fantastic exhibition detailing the cultural heritage of the Tasmanian First People. 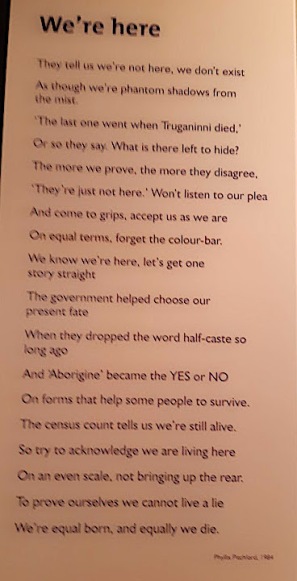 There are many stories showing the diversity and richness of Aboriginal and Torres Strait Islander cultures and the most compelling are those of resistance, resilience, cultural adaptation, creativity and leadership.

There is a lot to take in when you walk through the galleries devoted to Australian history and culture and so it’s a relief to sit and rest in a special place designed to help you relax, reflect, and yarn. And yes, you can recharge your mobile phone, if like mine the battery is low because the camera worked overtime!

Yarning circles and gathering circles are important places. They are where stories and knowledge can be shared in a caring environment that’s relaxed and comfortable. With our bodies, we include ourselves in the listening and learning that is being gifted.

We could do with yarning circles in every home and community.