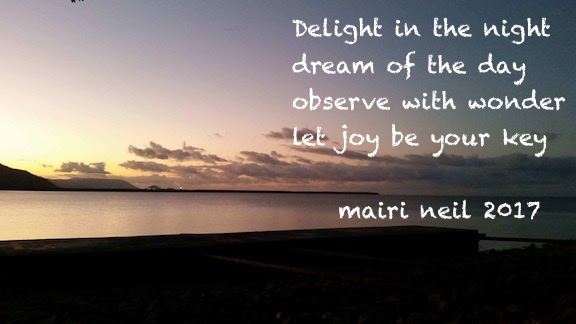 Travelling to and from work by train is often my writing time or time to pause, observe and reflect on life.

My notebook full of ideas scrawled as one line reminders or thoughts detailed in partial stories or poems (some may say doggerel).

I write down ideas for prompts for the class – like examining our hands – physically, emotionally, and historically.

Most people will be surprised by how many stories they can write about their own hands (or the hands of family or friends). Hands change as you age and activities or abilities can increase or decrease.

What are those raised veins saying –
the lumpy knuckles too
wedding ring too tight, abandoned
more than the veins are blue.

In the past, skin smooth and soft
and these hands were strong
a past of music, craft, and toddlers
weakness didn’t belong…

These hands feeble now
where once they achieved with ease
piano, guitar, sewing, knitting…
house renovations a breeze

Scarred from work and accidents
sun-damaged and skin dry
weakened grip and suspect skill
they’ve earned a rest, I sigh.

But wait, these hands still toil
a means to feed my passion
pens replaced with keypad
writing never out of fashion.

These trusted hands a part of me
what stories they can tell
Ignoring arthritic pain and age
I’ll write a memoir to sell!

I’ve written about my mother’s hands for the Women’s Memoir website, USA and took a photograph of her holding a large print Bible because her Christian faith sustained her throughout her life especially in times of grief.

When my Dad was dying, I sat by his bedside holding his hands and reflecting on all the jobs he’d done since entering the workforce, but particularly those taken to improve our lives when we migrated to Australia from Scotland.

I’m interested in politics, current affairs, and world events. In this era of the 24-hour news cycle and social media, it’s difficult to switch off.

Some days worse than others, some topics too hard to ignore – especially regarding Donald Trump, who so often dominates the headlines.

That Wall To be Built
Mairi Neil 2017

Humpty Trumpfy wanted a wall
keep Mexicans out, his rallying call
all the white supremacists and the KKK
crawled from under their rocks to have a say.

The Grand ol’ Master, David Duke
his supporters parading as men
marched into Charlottesville one day
but were chased back out again.

We take things for granted on a daily basis, always with the assumption that whenever we need something, it will be there. Sometimes we don’t notice small changes, only the dramatic ones.

The number of apartments, townhouses, and units being built has changed the demographics of Mordialloc where I’ve lived for 33 years.

One of the many Real Estate Agents who rings regularly trying to convince me to sell up said there has been a 60% increase in young couples and families buying into the area. They have moved here because of the charm of Mordialloc’s seaside village atmosphere – ironically the removal of stand-alone houses and the increased density of development has put that charm under threat!

My negative feelings about the “over” development of Mordialloc remind me of a song by Joni Mitchell, one of my favourite artists:

Hey farmer farmer
Put away that D.D.T. now
Give me spots on my apples
But leave me the birds and the bees
Please
Don’t it always seem to go
That you don’t know what you’ve got
Till it’s gone
They paved paradise
And put up a parking lot

When I returned recently from travelling overseas, I noticed a new mural on a wall in the car park behind the dentist I visit in Main Street Mordialloc. I mentioned the colourful artwork to my daughter,

“What was there before?”

“I think it was cartoon characters of the 90s,” MaryJane said, but neither of us really sure, yet we walk along the path to the railway station almost daily!

Maybe we’ll remember this artwork if it changes… or maybe not. Taking things and people for granted, a common failure too many of us have and the saying, ‘you don’t know what you’ve got until it’s gone,’ sadly true.

Live In The Moment Good Advice Too

Thankfully, I enjoy my job teaching creative writing because like train travel, I have the opportunity to write. Whatever topic I plan for my students, I set myself.

On Tuesday afternoon at Godfrey Street, Bentleigh last week, a student Lena suddenly pointed out the window. We turned to watch a beautiful Noisy Miner land on a clump of Crocosmia.

The lesson reminded students to think about the power of metaphor and simile to improve their writing, particularly poetry.

I worked on a poem started on the train and then added part two, attempting to incorporate the lesson using the wonderful inspiration provided by our visitor.

Poetry in motion and fun too!

A Tuesday in August
Mairi Neil 2017

A spring-like day
warm sun is out
after hiding for awhile
she’s come out to play
to make us laugh and smile.

A new mural at Mordi Station
catches the eyes of passersby
painted while I’ve been away
A tiger feisty and bright
no room for blues today.

I load some Myki Money
before the train arrives
slip coins into the slot
train’s on time, a win
a happy day my lot!

It is indeed a wonderful world
dear Satchmo got it right
when a warm sun shines
the uplifting joy spreads
to banish worry lines.

Redolent roses perfume paths
camellias bud and delight
enjoy each moment of warmth
‘cos too soon, it will be night. 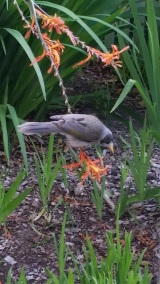 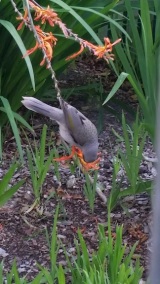 With a swoop, you arrive
an empty vessel needing a refill
balancing on trembling bells

an opera singer turned acrobat
pausing for tasty lunch on the wing
unaware of the Paparazzi nearby.

Wikipedia has information about both the invasive plant and the bird but please see comment below from friend and mentor in all things Aussie Bush to set the record straight in:

Crocosmias are grown worldwide, and more than 400 cultivars have been produced. Some hybrids have become invasive species, especially C. × crocosmiiflora hybrids, which are invasive in the UK, New Zealand, the American Pacific Northwest, and probably elsewhere.

The Noisy Miner feeds on nectar, fruit and insects. In keeping with its highly social nature, the Noisy Miner usually feeds in large groups.

Perhaps there’s a story behind our lone (lonely?) bird – I’ll leave that for you to compose!

8 thoughts on “Wistful Wandering and Poetic Pondering – Words Wile The Time Away.”