I can’t believe it is seven years since Mum passed away, and as usual, on anniversaries of a loved one’s death or other special occasion, thoughts drift to the past.

I love my Life Stories & Legacies class at Godfrey Street, Bentleigh because each week I can conjure a memory and reflection as well as record family stories and history: growing up, studying, working, having my own children, and all the incidents, major and minor events,  coincidences,  and occurrences that weave to make the rich tapestry of our life.

This morning, my older sister sent me a message to say ‘thinking of us all today’ and as messages flew back and forth, we shared memories of Mum and her legacy – so different for each of her six children and fourteen grandchildren.

No matter how old you are there can be something special about a mother’s love – here’s a memory I had one day on the train going to work.

Shelter From The Storm
Mairi Neil

Bruised clouds sweep the sky
a gloomy ominous pall.
I remember your voice
‘a thunderplump is on its way.’

Nearing sixty,
I wish to be six again
to feel comforting arms
gather me close.

To relax, as your hands
usually burdened with chores
keep me safe
in rhythmic caress. 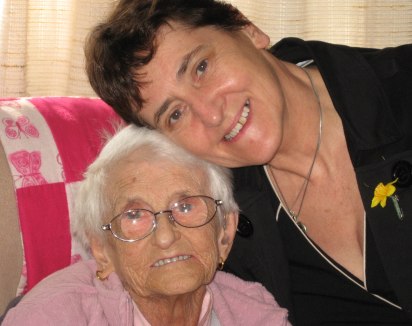 Last year, in class we talked about childhood games and memories of the parks and places where we’d play. Children haven’t really changed but childhood has and oldies like me notice the change – the way we parented and the way new generations parent.

We were certainly left to our own devices for more hours in a much less structured day!

Parks and Places to Play

My first nine years were spent in Greenock, Scotland. I can’t remember much of the first three years living at number 2 George Square, a tenement, in the centre of town, but the move further out to Braeside and starting school at Ravenscraig Primary, provides plenty of material and memories.

Despite the rustic name (brae means hill in Scots), there were no parks as such for us to play in. We spent a lot of time in back gardens (‘back greens’ as they were called) and playing games in the street. Traffic minimal in the 50s and early 60s with Dad being one of the few in the street to own a vehicle. He had a motorbike at first, then bought a Bradford van. We played on pavement and road rarely disturbed by cars. In those days it would be rare not to see children playing in the street.

We also roamed the hill opposite and the farmer’s fields at the bottom of the road. The housing scheme stretched on a steep hill. Our house at number 35 Davaar Road in the middle of the street’s curve. Davaar Road the topmost homes in the scheme. Across the road from us, behind the last row of grey Corporation houses, the hill climbed high to view or walk to Gourock and the River Clyde on the other side.

This brae devoid of tall trees, but spread with scrub, granite boulders, and heather. Enough natural flora to keep us entertained with games influenced by episodes of popular shows broadcast by the fledgling television industry: The Lone Ranger, The Cisco Kid, Robin Hood and his Merry Men (my favourite, Maid Marion), and whatever wonderful land Walt Disney invited us into when we wished upon a star on Sunday evenings.

Up the hill, I learned how to make daisy chains and to check who liked butter by waving buttercups under their chin and was shocked when a neighbour’s six-year-old asked if I wanted to see his ‘willie’. I shared Saturday night baths with three brothers, so couldn’t see the point!

A memorable part of the long summer holidays we spent collecting twigs, branches and anything that would burn in preparation for bonfire night in November. We never forgot Guy Fawkes or the rhyme, ‘Remember, remember, the fifth of November, gunpowder, treason, and plot!’

The hills also experienced children roaming in hordes, buckets and jam jars in hand, seeking blackberries when in season. The taste of Mum’s delicious bramble jam a great incentive to risk getting scratched and clothes torn picking the hard-to-reach ones, which always seemed the fattest and juiciest. 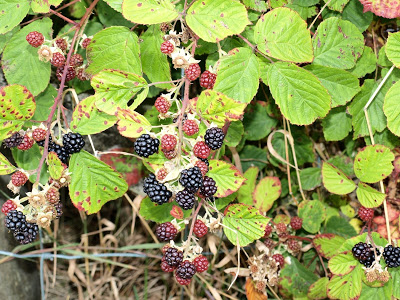 At the bottom of the street spread the farmer’s fields, where we weren’t supposed to go. His bull known to be a danger to life and limb. Of course, we incorporated a deliberate dare in some of our games.

There must be a guardian angel for stupid children.

The other reason the fields were off-limits was because the Tinkers (or Gypsies but now correctly referred to as Travellers) used to camp there.  Mum and Dad didn’t practise overt bigotry or prejudice against Travellers like some people. Mum, in fact, helped them whenever she could: letting them do mending and other odd jobs, and buying some of the goods they hawked (like wooden clothes pegs).

She often repeated a story of the ‘Gypsy Woman’ who knocked on the door when she was a little girl in Belfast. Her mother bought clothes pegs but also gave extra money and food. In return, for the kindness, the woman offered to tell her fortune but being a devout Christian Grandmother declined. Instead, the old  woman took Mum’s hand and prophesied that she would travel across the sea, not once but twice, and the last journey would be far away across a large ocean. Mum would also bear seven children.

You cross The Irish Sea to get to Scotland, so all of us knew the first part of the prediction was right! (It wasn’t until much later that we found out Mum gave birth to seven children and my older sister’s identical twin died soon after birth. Of course, the largest ocean was the journey to Australia by ship when we migrated.)

Mum also believed you don’t go ‘looking for trouble,’ stranger danger not indoctrinated like modern times and we were not made overly fearful, but we were warned to be careful and obey the limitations placed on us, ‘no visiting the Tinker’s camp.’

Again, rules we chose to ignore!

Unfortunately, as a consequence, for years a vivid nightmare recurred, of being terrified and running in fear of my life, yet unable to ask for comfort because I played in the forbidden fields.

Sometimes we live to regret not obeying rules!

I must have been seven years old and had wandered away from the usual gang of playmates, including my older brothers and sister. Always inquisitive, I decided to explore the fields at the bottom of the road. I discovered the remnants of an army camp – underground bunkers abandoned at the end of WW2 and no doubt used by the Travellers. Perhaps I’d heard the more adventurous boys talk about it – I can’t really remember. I do remember spending most of my childhood playing with my two older brothers and their friends because we were all so close in age – only 13 months separated me from George and 17 months separated him from Iain.

In the campsite, there were the usual discarded items: an old army boot, rusted tins, broken furniture, and piles of accumulated recent rubbish, including the ubiquitous empty whisky and beer bottles. Exciting finds for a curious child.

I never heard or noticed a movement from a bundle of dirty, grey blankets.

Without warning, an unkempt man reeking of alcohol made a grab for me. I ran for my life and didn’t stop until I was home, safe behind the gate. Davaar Road was steep but my little legs pounded the pavement without a pause.

The drunk maybe didn’t mean any harm, my presence probably surprised him as much as he startled me. I vaguely remember him murmuring about a match. Perhaps he woke up craving a cigarette – the two addictions of nicotine and alcohol often go together. All I remember is knicker-wetting terror; the sound of panting breath and thudding heart in my ears.

The proverbial wild horses would not pull me into the farmer’s fields! I didn’t care if I was accused of being a scaredy-cat because I was after that encounter. The smell and fear of the abandoned army camp forever part of my nightmares.

A more pleasant memory is playing near the secret lake. We’d walk along the Aileymill Road, a country trail linking the new housing scheme with isolated cottages on the way to Inverkip and Skelmorlie, tiny seaside towns further down the coast.

The hedgerows home to Willow Tits and Warblers singing their delightful ditties, the Golden Ringed dragonfly patrolling and the final goodbyes of the Swallows and Cuckoos before they left for Africa.

Cotton Grass swayed in the breeze and the heather’s vibrant colours bright amongst scented summer foliage not found in our home gardens with their neat rows of dahlias and roses. The hedges camouflage for lizards and beetles darting at our feet and the hilarious attempts of the boys to capture them.

We fished for tadpoles, and hunted frogs and toads, in our secret lake. Logs and stones upturned along damp paths. Bumblebees buzzing and Blue Bottles humming and maybe a hare or deer spotted, fleeing our noisy play. Sojourns to the secret lake a highlight of the long summer holidays as we ventured further afield than allowed.

I revisited Braeside in the 70s and like everything else seen through adult eyes, the secret lake had shrunk. More a puddle really, just as the farmer’s fields seemed a small tract of land with plenty of cowpats, but not a bull in sight!

However, the hillside and view to Gourock was still a scenic wonderland and looking across the sparkling River Clyde revived memories of delightful Sunday School picnics at Kilcreggan and trips ‘doon the water’ to Millport and Dunoon. Children’s laughter still echoed and with a deep breath and strong imagination I could smell Mum’s blackberry jam.

2 thoughts on “Memories Enriched By Love”