I chose to have a break from the pressure of writing deadlines, including blogging – and it’s been wonderful – once the guilt receded.

The last few weeks have left me drained and struggling to find my usual positivity and so I gave myself the freedom not to write once my classes finished for the term.

I produced three anthologies for the different classes at Mordialloc, Bentleigh, and Chelsea and it is wonderful to have a record of the delightful writing from last semester’s students. And it encouraged me to polish a few pieces.

However, the editing, laying out, printing and collating of the books entails hours of work and always leaves me tired.

I appreciate teachers at universities, TAFE, and schools have greater workloads, larger class sizes and more demands on their time than me. However, the pressure of end-of- term projects, bureaucratic paperwork and the looming lesson-planning over the holidays is ongoing for most teachers.

Therefore, it has been a short-lived break but in the words of an old Monty Python skit ‘a merry one’ – well not exactly merry but a break I needed with some memorable high spots.

I spent quality time with two special friends Glenice Whitting (we attended an evening celebrating the stories and contributions of refugees – more of that in another blog) and Lisa Hill (we attended a one-man show at Kingston Arts Centre: Is it Because I’m An Indian? enjoying a delightful dinner afterwards at the Bawarchi Indian Restaurant, Moorabbin).

An intensive day of shooting over the weekend saw at least the filming completed in another of my projects. This one organised by Kingston Youth Services where participants share their skills and enthusiasm to write, produce and complete a short film based on the theme of Transition.

This intergenerational project involved several workshops with industry professionals and won’t be completed until the end of September with films to be shown at a public screening in October. Our enthusiastic crew is well on the way to meeting the deadlines.

A triumph of networking, flexibility, adaptation and cooperation meant my script Home was accepted, survived several drafts, including a major rewrite to substitute characters and locations and accommodate the availability of people, places, and equipment.

Another dear writer friend (I’ve found writers are the salt of the earth!) accepted the major role and was available for a 6.30am start on a freezing winter’s day!

I’m looking forward to blogging about the experience from ‘start to finish’ to encourage others to put their hand up and volunteer for Arts projects, especially when you get the opportunity to work with different  generations and people you have never met. The bonus of picking up new skills and knowledge has kept this lifelong learner on her toes. 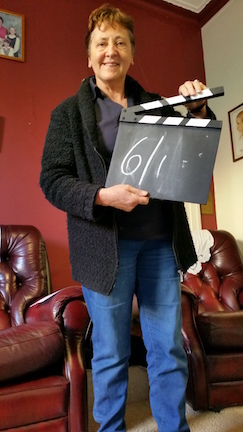 The film shoot was Saturday – the preparation (cleaning my house, moving furniture) seemed to last all week!

On Sunday, I helped Kristina, an ex-student of my Monday class and now an active member of Mordialloc Writers’ Group, make our Readings by The Bay more special by hosting an author event with picture storybook writers, Isobel Knowles, and Cat Rabbit. (More of that in another post.)

When Is A Break Not Really A Break?

On reflection, my break from writing fed my passion for writing – on books, refugees, film, collaborative projects, teaching, man’s inhumanity to man …

The last three frenetic weeks filled with things to do, people to see, and places to be. But in the background, some seismic global and local events almost making my mind shut down and energy disappear.

The Orlando Massacre, a shocking immobilising crime that dominated social and mainstream media and conversations of friends and family. As an activist who is passionate about social justice, I was overcome with sadness. The level of anger, disaffection, hate and desire to hurt others evident by the perpetrators of horrific crimes never ceases to appal me.

In Australia, we are undergoing the longest Federal Election Campaign I can remember and I’ve been voting for 45 years! One of the issues is the current ruling party wanting a plebiscite on gay marriage. Many people fear this will encourage bigotry, fear and ignorance to flourish.  The consequences for the extensive LGBTQIA community could be terrible. An expensive, divisive plebiscite that is unnecessary because parliament can pass the necessary legislation.

The recent referendum and unknown consequences of the UK’s ‘Brexit’ from the EU also caused me anxiety, especially with the murder of Labour MP Jo Cox that many people seem to have forgotten already. I was born in Scotland and returned there for two twelve-month periods in my early twenties – the murder of a politician like this is devastating. What is happening to Britain?

It is frightening that immigration and the plight of asylum seekers and refugees are often used in political campaigns here and abroad stirring up xenophobia and racism. There is no doubt we are experiencing the biggest global movement of people since the Second World War and instead of individual nation states closing their borders we need a considered global cooperative approach. Solutions not selfish posturing.

Perhaps it was serendipity that one of my final lessons of the term in the Life Stories & Legacies writing class at Godfrey Street Bentleigh was on the subject of Serenity to put events in the private and public arena into perspective.

Negative feelings and emotions challenge our equilibrium: What can we DO about the horror/sadness/helplessness/hopelessness?

I write and it helps me. I encourage others to try and find words, ideas, and memories to match their feelings and because it is a  Life Story class, I encourage reflection. 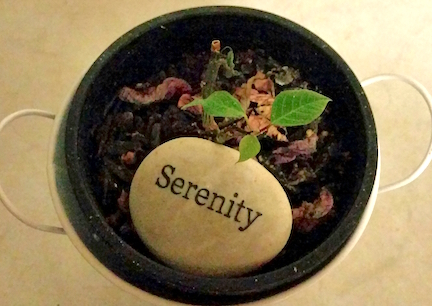 Once a year, sometimes more often, I visit Stony Point on the outskirts of Melbourne. This tip of the Victorian coast looks across to French Island among other smaller islets and the tide flows out to the sea. There is a pier always populated with anglers – more in some seasons than others. 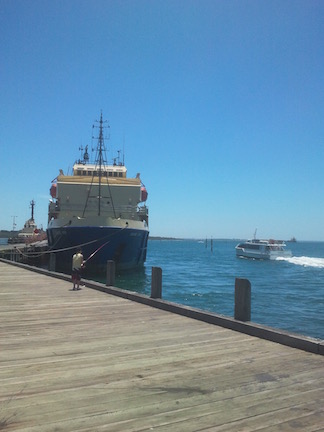 There is a ferry to French Island and half the pier is now fenced off for Navy patrol boats installed during John Howard’s ‘be alert not alarmed’ crusade.

I visit because my husband John requested his ashes be scattered where they would be carried out to sea, ex Royal Navy he was more comfortable on the water than land and Stony Point fitted the bill.

There are mini wetlands (or mud flats) at Stony Point frequently visited by shearwaters, pelicans and of course the ubiquitous seagulls. The place oozes tranquillity.

The area is attractive to fishermen and regardless of the season you will always see boats coming and going. The gutting and scaling table is regularly visited by a host of birds who seem to know just when to land and wait for a feed. The take-offs and jockeying for advantageous positions to catch thrown leftovers provides a raucous display by the birds, especially the pelicans.

My daughters laugh at my delight and are convinced I have the largest collection of photographs of pelicans in the world!

I love watching the interaction of the birds, their acceptance of each other – there is a lot of noise and jostling but rarely violence.

Many people visit Stony Point and there is a caravan park with permanent residents as well as frequent holidaymakers. Every day there will be bush walkers, anglers, picnickers, fossickers, commuters to French Island, naval personnel from nearby Cerberus base and a handful of locals who operate a rundown cafe/shop.

There is also people like me who come for serenity.

Stony Point is the end of the line for the train – a little diesel that comes from Frankston. The station personnel seems to be from another era of Railway culture – a more friendly, relaxed era. 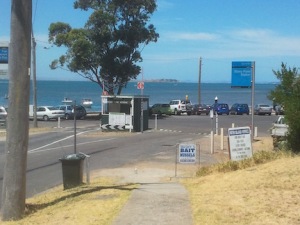 I always leave feeling calm and at peace.

Where do you go for serenity?

(This may be a room, a church, a friend’s house, a special tree in your garden, or indulging in an activity (like writing)…

Have you a special place you visit only once or twice a year? A place that may hold a strong emotional attachment or memory? Perhaps a favourite holiday destination that allows  you ‘to get away from it all’!

What is the opposite of serenity for you? Is there one particular time or event that stands out as particularly stressful? How did you cope and recover or are you still troubled?

My evening walk a relaxing end
To a day of relentless heat
That baked trees, people, cars, and concrete.
Oven temperature lowered,
I’m no longer a hot lump
Of fatigue and frustration.

Exhausted birds peep
From their sheltered boughs.
They flutter feathers but leave evensong
To the cicadas celebrating the cool breeze
From the foreshore.

The summer sun slides seawards
While the silver shadow of the moon
Waits in line to shine.

Screeching curses jump
From the window of a nearby house
Adult voices spit and spew.
A dog yaps hysterically
Accompanying the invective
Timing perfect, as if scripted.

This is no television drama.
Rather a domestic tragedy
Of Shakespearean proportions unfolds.
Years of resentment boiling over
No stuttering
As domestic bliss unravels

What to do?
Pat perspiration from hot cheeks
Stare at white handkerchief…
Have they called a truce?

I remember to breathe.

No more yells or broken china,
No slammed doors or weeping.
Although my body weeps
As voices in normal tones
Float from the window

The summer sun slides seawards
The silver shadow of the moon
Waits in line to shine.

(When I recorded the history of our local primary school in Mordialloc on its 125th anniversary, I interviewed many past students and staff. A woman who attended the school during the depression years of the 1930s and coped through the tumultuous war years said, ‘no one had stress then – we just got on with life.’)

Reflect on the lives of your parents and grandparents. Do you think they suffered stress? How do you think they dealt with the difficult periods of their lives? Was the pace of life really that different? If so – how?