It’s day six of NaPoWriMo 2016, and as one of those who has ‘fallen behind’ in the challenge I hope to catch up over the weekend. Today, I’m revisiting Day Three when I substituted a different poem for the challenge to:

write a poem in the form of a fan letter to a celebrity. Now, this could be a celebrity from long ago, and needn’t be an actor or singer (though it could be). You could write to George Washington or Dorothy Dandridge, Marie Curie or The Weeknd. Happy writing!

I wanted to write a poem tribute about Marilyn Monroe after visiting the special exhibition Marilyn at Bendigo Art Gallery. This comprehensive display comprises of authentic artefacts, clothing and other memorabilia belonging to, or worn by Marilyn.

There are more than 20 original costumes from some of her greatest films with clips from the movies and interviews with Marilyn playing alongside. She is stunning in Gentlemen Prefer Blondes, How to Marry a Millionaire, Love Nest and of course the infamous moment when she sang ‘Happy Birthday Mr President‘ to JFK.

There are also numerous dresses and accessories from Marilyn’s personal wardrobe and dresses by her favourite designer Emilio Pucci. She preferred understated style away from the screen and it’s strange to see the grey skirt, plain salmon pink blouse and beige sweater – such a contrast to that revealing white dress adorning the eight-metre-high sculpture, and the white fox fur muffs and gold lamé dress she wore in Gentlemen Prefer Blondes.

There is a lot in this exhibition to introduce us to a Marilyn most of us don’t know.

Among the many diaries uncovered after she died, there were journals of poetry and long entries retelling her dreams and thoughts and observations about people and events. She kept a writer’s notebook and used her poet’s eye.

There are original scripts with personal notes scrawled in pencil about directions and performance: ‘reveal electricity in dancing’ ‘sparkling face’ ‘didn’t expect success every time’

Monroe was a complex figure, full of paradoxes and contradictions. Her roles seem to define a limited, highly regulated vision of female power and desire, but her performances often subverted and tested these definitions. Shrewd, ambitious, intelligent, vulnerable, politically aware, she wanted to extend herself. She was often anxious and insecure about her abilities, but also determined to do more with them, to take her talents and use the celebrity she understood so well to different ends.

In 1953, the year I was born, Marilyn was presented with the 20th Century Fox Award for Sweetest Girl in Motion Pictures, and along with Jane Russell she preserved her hands, footprints and name in wet concrete outside Grauman’s Chinese Theatre, Hollywood.

Marilyn was 27 years old and for seven years was portrayed as a superficial blonde bombshell by Fox Studios. In 1954 after a life-changing trip to Korea to perform for the troops she recognised her worth and popularity, demanded a pay rise and better working conditions. Rebelling against the dumb blonde image, she even started her own production company, Marilyn Monroe productions.

She was ahead of her time because not many actresses were successful businesswomen or liberated enough to establish their own company and renegotiate contracts.

But, in 1962 (the year I was 9 years old and my family emigrated to Australia), Marilyn Monroe was found dead from a drug overdose. Was it accidental? Suicide? Murder? The jury is still out and conspiracy theories abound.

The tragedy and legend of Norma Jeane Baker who became Marilyn Monroe was part of my childhood. In the 1960s, popular and gossip magazines proliferated, celebrity news items tumbled out of Hollywood, television brought the big cinematic stars into lounge rooms.

The shops and cafes in Bendigo have caught the Marilyn bug and are milking her popularity:

In the exhibition you see the books on her bedside table when she died: Of Stars And men, Oh, Careless Love, Man’s Supreme Inheritance and Human response to Our Expanding Universe. She had a personal library of over 400 books and prided herself on lifelong learning and enjoying intellectual conversations.

[about reading Rilke’s Letters to a Young Poet] I was never told what to read, and nobody ever gave me anything to read. You know — the way there are certain books that everybody reads while they’re growing up? . . . So what I do is — nights when I’ve got nothing else to do I go to the Pickwick bookstore on Hollywood Boulevard. And I just open books at random — or when I come to a page or a paragraph I like, I buy that book. So last night I bought this one. Is that wrong?
… Arthur Miller wouldn’t have married me if I had been nothing but a dumb blonde.

A prized possession was an autographed photograph of Einstein ‘To Marilyn with respect and love.’

Of course, Gossip magazines are there too:
Motion Picture, Screen Guide, Modern Screen, Foto Parade, 3D Movie, Photoplay and many of the headlines and articles are about Marilyn. Her professional and personal life often in turmoil with a string of unsuccessful marriages and affairs.

Overwhelmed at seeing her name in lights and being famous, she stopped the car one day to take a photograph from a distance saying, ‘Somebody made a mistake.’

She suffered chronic insecurity regarding her acting ability and performance anxiety made her physically ill. Add the pain of endometriosis and insomnia. She was often late on set and this tardiness infuriated co-stars and crew.

An actor is not a machine, no matter how much they want to say you are. Creativity has got to start with humanity and when you’re a human being, you feel, you suffer, you’re gay, you’re sick, you’re nervous or whatever.

Marilyn overcame a difficult childhood. She never knew her father and her schizophrenic mother paid others to look after  little ‘Norma Jeane’ who spent years in care. Shunted from orphanage to foster homes, Marilyn remembered being sexually assaulted and raped.

No wonder she married a neighbour at 16 when her religious fundamentalist foster parents abandoned her by moving interstate. They said they couldn’t afford to take her, but perhaps they were glad to pass the responsibility for their attractive, busty, determined, ambitious charge to someone else.

Visit the exhibition, immerse yourself in the information, objects and atmosphere. Let your imagination loose.

An authentic object that once belonged to an enigmatic star is sure to prompt a frisson of excitement in even the most detached viewer.

Yes, indeed! It prompted me to write a poem.

I decided to experiment with the pantoum form because I had so much information. There were certain facts about Marilyn’s life that repeated like a motif, plus her story and legacy can’t be captured in a few words.

The poem will need more work but if I don’t post now, another day in the poetry challenge is lost. For those who don’t know, or have forgotten what a pantoum is here are the basic attributes:

• A pantoum is a poetry form originally from Malaysia, invented around fifteenth century, using repetition and rhyme woven like a braid. In a traditional pantoum, each line is repeated twice in a specific pattern.
• English-language pantoums often follow the traditional form loosely, “bending” the rules.
• A pantoum may consist of a few stanzas or go on forever! Using four line stanzas, repetition and braiding it works similar to the villanelle.
• Frequently, in a pantoum, the same line or phrase has a different meaning the second time it appears in a poem, either because of slight changes in the punctuation or wording or because of what’s around it.
• The poet may vary the repeating lines so they are not exactly the same – this is the art of writing in a fixed form to avoid an already repetitive form from becoming boring.
• Variety is the key to writing well in form. Tweak the form a bit, play with repetition, line length, metre and rhythm.
• Pantoums are composed of quatrains, groups of four lines.
• The first line of a quatrain repeats the second line of the quatrain before it.
• The third line of a quatrain repeats the fourth line of the quatrain before it.
• A pantoum thus has an interlocking pattern.

Will The Real Marilyn Please Stand Up
Mairi Neil

Dressed in that white dress you set the world on fire
‘The Marilyn Monroe’ – a legacy larger than your life
The personification of womanhood all men desire
Popular pin-up girl, sex symbol, and beautiful wife.

‘The Marilyn Monroe’ – a legacy larger than your life
What makes you an enduring sex goddess men adore?
Popular pin-up girl ,sex symbol, and beautiful wife
The untarnished ‘girl next door’ archetype no more.

What makes you an enduring symbol for women to adore?
Oozing sensuality, wooing audiences, a photographer’s delight
The untarnished ‘girl next door’ gone, Norma Jeane no more
The childhood sexual abuse, mother’s rejection hidden from sight.

Silks, satins, bugle beads, sequins, sunburst pleats aswirl
Hiding the scars of endometriosis, surgery, and miscarriage
Marilyn, no calendar girl but an Aphrodite transforming at will
Smouldering siren under floodlights glaring on your marriages

Hiding the scars of endometriosis, surgery, and miscarriage
Unguarded moments reveal your anxieties and desperate aloneness
No smouldering siren when focus on divorces, affairs, and marriages
The singing and dancing blonde bombshell rejected as meaningless

Unguarded moments reveal your anxieties and desperate aloneness
Yet, beneath fragility and addiction, your strong independent mind
Rejecting the singing and dancing blonde bombshell as meaningless
If alive today in a changed world perhaps a sense of self you’d find.

People chose to mock and undervalue your strong independent mind
Marilyn, the educated reader who loved writing poetry and prose
If alive today in a changed world perhaps a sense of self you’d find.
Male power and their fantasies would be declared the real foes

We will not let die the Marilyn you, so wanted to be
Not just the breathy, brainless sex symbol some men desire
But a serious, dedicated actor, seeking to be happy and free
With your talent, as well as beauty, you set the world on fire! 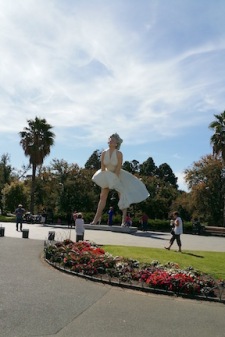 In the early days, struggling to transition from model to actress, Marilyn posed nude for $50. The image in the Avendon calendar was bought for $500 by Hugh Heffner who used it as the centrefold for the first issue of Playboy Magazine in 1953. He sold 54,000 copies!

However, Eve Arnold, another photographer, and a friend captured Marilyn’s unguarded moments…

The legend of Marilyn blossomed like a blast of heady perfume but the smouldering siren was only a pose, a part she played for the very public Marilyn Monroe but couldn’t live…

4 thoughts on “Did You Know Marilyn Monroe Was a Poet?”