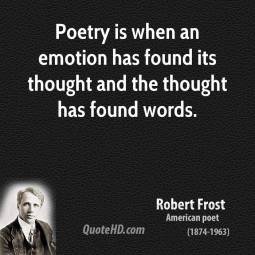 Through an item in my Facebook newsfeed I discovered today, April 1, is the first day of NaPoWriMo 2016. The challenge of National Poetry Writing Month is to write a poem each day for the month of April.

A participant and an optional prompt will be featured daily on the NaPoWriMo website. I’ve never thought of participating before but because I am planning my lessons this term around poetry, I thought I’d accept the challenge for some of the days and hone any poetic skills I might have.

Every day, they will also feature a different poet who writes in a language other than English, but whose work is available in English translation. This will be invaluable to move me out of my comfort zone and improve and enrich my knowledge of poets as well as poetry.

The first such poet is Japan’s Hiromi Ito. And not surprisingly, the first optional prompt is to write a lune – ‘a sort of English-language haiku’.

The lune is also known as the American Haiku. Apparently, first created by the poet Robert Kelly because of his frustration with English haiku.

Unlike haiku, there are no other rules and although less syllables than traditional haiku (5,7,5), it provides a little more freedom with:

I like writing haiku from images of nature and with the recent news of global warming and the worry that Australian researchers will not be funded, the natural environment and our future, is very much on my mind.

So for the purpose of a “Kelly” lune, I chose this photograph by Olegas Truchanas of Lake Pedder, Tasmania 1971 from the National Library’s, Australia’s Wild Places, by Roger McDonald.

In the 1970s, there was a fight to save Lake Pedder being destroyed for a hydroelectricity scheme. The struggle was lost, but from the battle lessons were learned and when I flew down to Tasmania to support the battle to save the  Franklin River  conservation and the environment had become mainstream concerns.

My experience going up the Gordon River from Strahan and supporting the protesters to stop a dam destroying a world heritage area will live in my memory forever. Since then I’ve trekked and camped in the Tarkine, another area we must save for future generations. 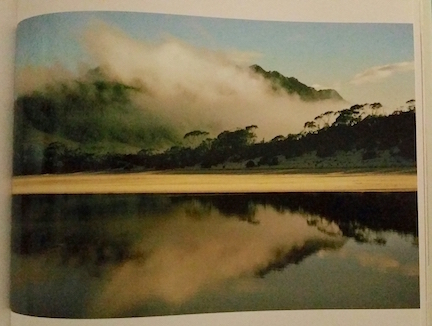 Save the wilderness
from logging
Ancient trees Earth’s lungs.

Poet Jack Collom created his variation, which is a self-contained tercet** with his poem word-based, not syllable-based. It has the structure of 3 words in the first line, 5 words in the second line and 3 words in the final line. And no other rules.

I attempted a Collom lune:

Lake and hills
Reflecting pool of the future
Wilderness or resort?

**A tercet is a poetic unit of three lines, rhymed or unrhymed.

Thomas Hardy’s “The Convergence of the Twain” rhymes AAA BBB; Ben Jonson’s “On Spies” is a three-line poem rhyming AAA; and Percy Bysshe Shelley’s “Ode to the West Wind” is written in terza rima form.

A terza rima is an Italian form of poetry first used by Dante Alighieri. A terza rima consists of stanzas of three lines (or tercets) usually in iambic pentameter. It follows an interlocking rhyming scheme, or chain rhyme.

Unrhymed tercets include Wallace Stevens’s “The Snow Man”; and David Wagoner’s “For a Student Sleeping in a Poetry Workshop.”

I sincerely hope none of my students will fall asleep in the lessons I’ve planned, but if they do I’ll just write a poem – perhaps a lune.

My next attempts at the lune challenge were inspired by the painting Breaking Home Ties, 1890 by Thomas Hovenden, an American artist born in Ireland so he understood the pain of leaving home. 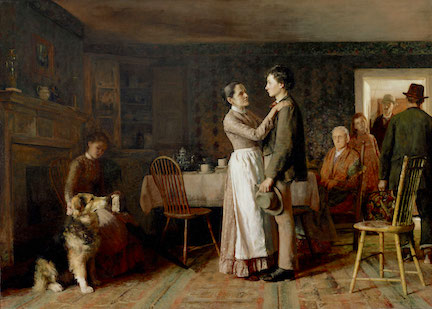 A Kelly lune is followed by a Collom lune.

Our childhood must end
mother’s weep
When children leave home

I didn’t quite make the deadline for the challenge because my clock reveals we are already into April 2.  However, because of the different time zones, I may be forgiven – it will still be April 1 somewhere…

If anyone has taken up the challenge or wants to, I hope they’ll share their lune with me and any other poems the month yields. Writing and sharing our poetry over the next 30 days, or any time, can only make us better poets and maybe friends.

Life often gets in the way of my creative writing but NaPoWriMo, which makes April National Poetry Writing Month is definitely a great way of being inspired and ensuring the ideas, words and pen keep flowing.

The child within me
Ponders life and the future
The path a mystery.