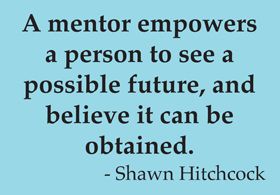 I’ve received one of those emails that starts the day with joy. Matilda Butler, an accomplished writer/publisher I met through the Internet in 2009 has produced more remarkable books to help women tell their stories.

Here is part of the email:

It was just two years ago that I shared news about the release of a four-volume anthology series called Seasons of Our Lives. Those volumes went on to win 9 book awards and were ranked in the top 5 in Kindle’s bestseller list for Writing Skills and in the mid-20s for Memoir.

Building on that success, WomensMemoirs.com held a major contest to seek the best stories that reflect on women’s lives and contribute to our understanding of ourselves as well as others. Today I’m pleased to announce the launch of:

TALES OF OUR LIVES:  Reflection Pond, a two-volume anthology of award-winning, inspiring, women’s true stories told from perspectives that illuminate our diverse lives. The second volume is Tales Of our Lives: Fork In The Road.

And these volumes are already #2 and #3 in Kindle’s bestseller Writing Skills books and #17 and #31 in bestseller Women’s Memoirs.

When I discovered Matilda’s memoir site the information and inspirational stories led to my first foray into sending my work into cyberspace to be read by others.

The guest writers and writing tips on the site invaluable if you want to improve the telling of your stories. You also learn what other people are writing and reading.

I had three pieces published about my mother and my childhood, and even won the regular writing contest Matilda organised to encourage women to share their stories.

Guising and Galoshens (about Halloween customs in Scotland)

Matilda’s first E-books of stories from women were based on the Seasons of Our Lives and I had stories in three of these books. Over the 4 volumes 100 stories were told!

A wonderful teacher who wants to encourage others, Matilda and her business partner Kendra Bonnett ensured a take-away (writing exercise and advice) was always included at the end of each story.

The concept behind the four volumes of Seasons of Our Lives originated on our website WomensMemoirs.com. The idea was that we’d provide content to help women write their memoirs. Over time, we wanted a two-way exchange. We wanted women to be able to share their stories with us and others. And that was the beginning of a series of contests. Then last year, we decided to have just four contests — one focused on stories from each of the seasons of the year.
• We received hundreds of entries and soon realized that we had some real gems, stories that needed to be shared more widely than just our website. We began the long process of reading all the entries and selecting just the best.
• But we didn’t stop with just the best of the stories. We decided to write a takeaway, a mini-lesson, for each story. We wanted readers to have comments that would help them reflect on their own life stories and highlight writing suggestions that they can use as they work on their own legacy stories.

These books are still available at Amazon:

I had the privilege of meeting Matilda in 2012 when my daughter MaryJane and I travelled around the USA by train. The six-week journey, one of recuperation and adventure. I was still fragile from my mastectomy and chemotherapy and MJ from the devastating consequences of a routine operation that went horribly wrong.

After an exchange of emails, when Matilda discovered our plans, she invited us to visit her home in central Oregon. We couldn’t do this, but we were going to Portland. 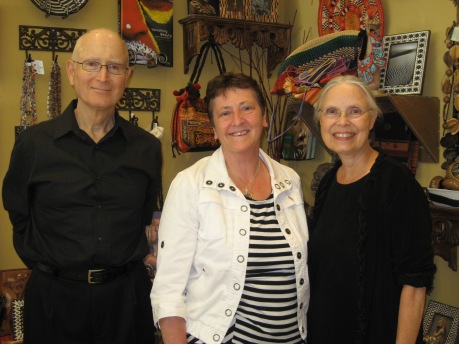 Matilda and husband Bill travelled several hours by car and stayed in a hotel overnight so they could be the ‘host and hostess with the mostest.’ As our travel guides for a day in that gorgeous city, they took us to lunch and then the Portland Art Museum. The visit as fresh in my mind as if it were yesterday and a treasured memory.

We were introduced to the indigenous people’s culture and many modern-day artists. 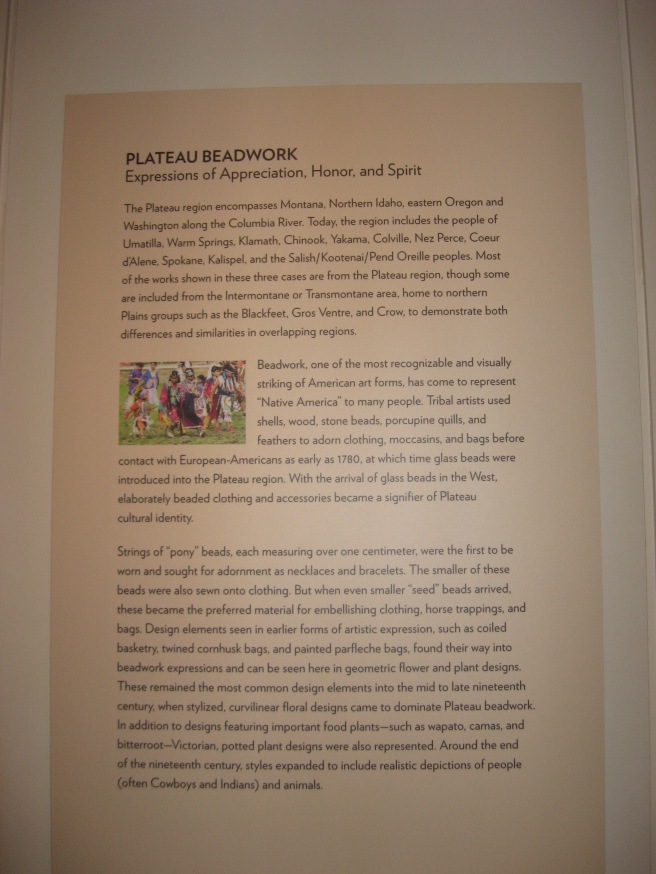 We were in Portland to travel down the Columbia River to Astoria, tracing the steps of Captain John McInnes, my father’s Great Uncle who captained the Cadzow Forest as it plied trade between Britain, Australia and the Americas.

Unfortunately, the ship went down with all hands in 1896. Captain John’s namesake, my father’s older brother John, also a seaman, drowned off the coast of Texas in 1927. Mary Jane and I researched in the library at San Antonio for more information about both men.

We were so close, yet so far from the younger John’s grave at Corpus Christi, but due to poor planning and the train timetable a visit, there will be an excuse for another trip!

However, by experiencing the mighty Columbia River and visiting the Maritime Museum at Astoria, we imagined and absorbed life through the eyes of men aboard the Cadzow Forest. The information and exhibits in the gallery filled in gaps and provided ideas for research about what life must have been like over a century ago. 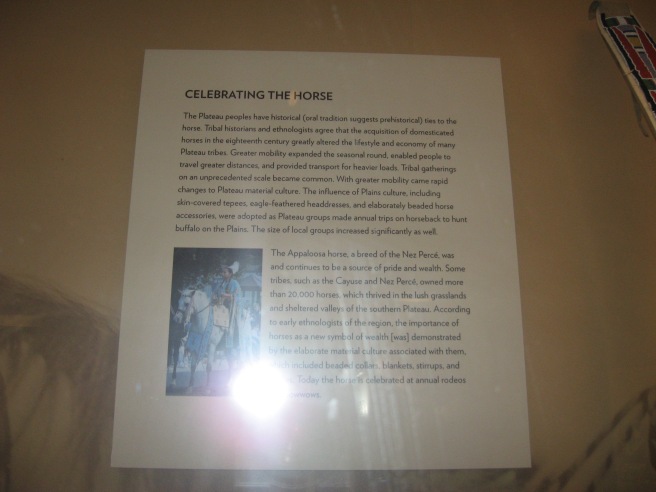 There is no better way to experience a place than through the eyes of an informed local and everyone we met in Portland, including Matilda and Bill were friendly, knowledgeable and hospitable.

There were amazing exhibits at the gallery that told stories of the human condition. As writers, we want to engage emotionally and use words. Artists use other skills and several of the pieces at Portland confronted and delved into the darkest aspects of the human soul as well as the brightest and uplifting.

As a parent who frequented art galleries and museums with my children from a young age,  I appreciated this sign, which I have never seen anywhere else. 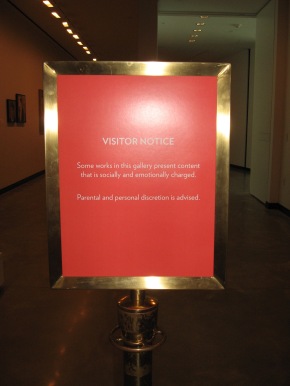 An exhibition that will inspire a host of poems or stories for a writing class if they chose to visit was this one by American Edward Keinholz: The Western Motel 1992. 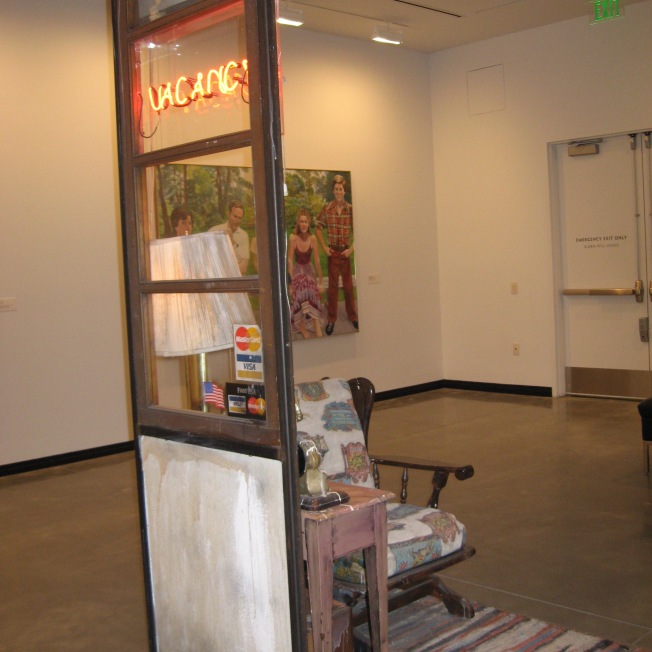 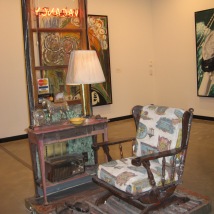 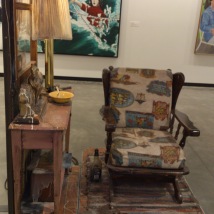 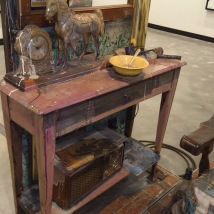 I was struck by the poignancy the artist has created by attention to detail and my imagination went into overdrive. If ever people feel the need to reinvigorate their love of writing and feel bereft of ideas, I suggest a visit to an art gallery or museum!

Another exhibition that impressed both MJ and me was one around storytelling. By pressing a button you could see a video of Portlanders (not sure if that’s what they’re called) who responded to a request to bring in an object and explain in a couple of minutes why it is important to them.

I can still feel the weight of Mary Jane’s arm as she slipped it through mine, and the warmth of her body as she cuddled close to me while we watched a young woman explain why she had held onto her mother’s X-rays long after her mother had died of an aggressive brain tumour. The story resonated with both of us for different reasons.

I kept John’s X-rays and MJ incorporated them in an amazing short film to explain grief and the human toll of industrial diseases like asbestosis.

Artists thousands of miles apart telling stories through different mediums, purists and cross-pollinators of media – but always focusing on the detail and that all-important human condition. Emotional engagement equals remembering – and we’d all like to be remembered.

Matilda’s latest books, as well as her others, excellent examples of well-written and engaging stories that you can harvest to spark your own stories and improve your readability.

More than that, they are a record showing how extraordinary the lives of ordinary people are!