The most thoughtful Christmas gift I ever received was unexpected and saved Christmas 2001 from disaster.

It was a scorching December with El Nino doing its worst. I worried about husband, John’s deteriorating health and determined to make Christmas as cheerful as possible. In the dry hot weather, he struggled to breathe as worsening asbestosis and an inoperable lung cancer sapped his strength.

We had sold the car because even with the help of portable oxygen bottles John now found breathing an effort. He had no energy to drive and I couldn’t. I was fortunate that many friends offered transport if I thought it necessary and I was never short of volunteers to take us to doctor and hospital appointments.

We lived within walking distance of the railway station and town centre so life without a car manageable. The girls walked to local schools – Anne to Year 9 at Mordialloc College and Mary Jane in her last year at Mordialloc Primary School.

A girlfriend who drove a six-seater van offered to pick up a Christmas tree I had on order from the local supermarket. For years, I bought a Christmas tree from a charity but lack of volunteers killed that service. In 2001, Safeway supermarket advertised real Christmas trees for the first time. What serendipity, I thought.

It was the last day of term; a week before Christmas, and the girls were excited about coming home early to decorate the tree. Christmas tree decorating, a much-loved family ritual. Anticipation put an extra bounce in their step as they left for school in the morning.

Christmas lifted our home from ordinary to spectacular with a few boxes of decorations and that extra special smell of pine spread throughout the house.

In the early days of migrating to Australia, my brothers used to cut a branch from a huge pine tree in the backyard. Latterly, my mother bought an artificial tree because she said it was less messy, but for me the smell of pine wafting through the house is Christmas and reminds me of many happy years growing up at Croydon. 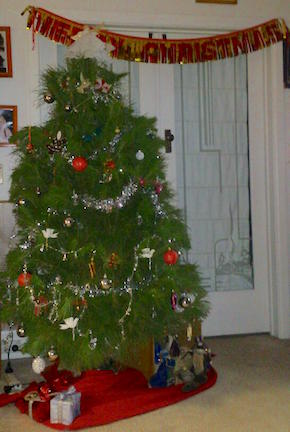 Imagine my horror when instead of collecting a tree on arrival at the supermarket, I was offered a refund by a young manager with an apologetic smile.

‘Sorry Mrs Neil someone forgot to water the trees over the weekend and they’re dried and shrivelled.’
‘All of them?’
‘Yep. Dead, I’m afraid. The weather’s been so hot.’
‘Are you getting replacements?’
‘No, sorry, we won’t be buying any more – it’s too late.’
‘What…what am I going to tell my children?’
His embarrassed ‘I’m sorry…’ trailed off as I burst into tears.

My girlfriend, Lesley led me to her van as the young manager turned various shades of red, no doubt wishing the floor would open up and he could disappear. Or maybe that was my wishful thinking!

I wept on John’s shoulder when I got home. The worry of his deteriorating health and our changing circumstances, added to my grief. We both knew the tears were not just about the Christmas tree.

‘It’s not the end of the world – or Christmas.’ John comforted, ‘come on, love, we’ll work something out.’

We resolved I would take the girls shopping the next day. Regardless of cost the best artificial Christmas tree found would be bought – although with Christmas Day so close this could be an impossible dream.

I returned to Main Street and checked the local shops, but drew a blank. I met the girls from school to tell them of the disaster at Safeway. Their stoicism humbling as they tried to cheer me up. They even expressed concern for whoever had let the trees die, worrying that they may have lost their job.

I felt less charitable and suggested there should be consequences for the blunder. As is often the case, our children surprise us and my girls’ reaction to what I’d deemed a tragedy made me feel ashamed of myself.

As we neared home, Anne and Mary Jane dawdled behind me, hiding their disappointment with downcast eyes and silence until they heard my noisy intake of breath.

I couldn’t believe it. A 6ft Christmas tree took up most of the front veranda. The fragrance of a thousand pine needles scented the air. The girls whooped at the surprise.

‘What a storyteller mummy and we believed you.’
‘What a tricker you are.’

They weren’t listening to my denials as I read the scrawled note stuck between the branches. ‘Have a great time decorating this – Merry Christmas, love Lesley.’

Already inside, the girls were yelling at John to come and see the tree. They laughed and giggled, believing I had planned ‘the best surprise’.

I rang to thank Lesley. She confessed to driving for two hours before at last finding a tree for sale in a distant suburb. ‘I know John is very ill and making this Christmas special is important for all of you.’

Lesley’s thoughtfulness certainly gave us a Christmas to remember. Her generosity allowed us to create wonderful memories as we shared the ritual dressing of the Christmas tree.

The first decoration added was a crystal and gold pineapple – a gift from another dear friend who lives in Myrtle Beach, South Carolina. Jean gave me the pineapple ornament so that every Christmas I’d remember our friendship, which dates back to being toddlers in Scotland. Jean’s family our neighbours in Braeside, Greenock.

I often recall my childhood in Scotland and the excitement of making decorations at Christmas for the tree. In the 50s and 60s, ordinary folk had no spare cash for tinsel, coloured balls and all the various Christmassy ornaments available nowadays. Most people made their own.

Mum showed us how to fold the washed silver tops from the milk bottles. We threaded them into clusters for ‘bells’. We traced and cut out stars and other seasonal shapes from cardboard and covered them with the smoothed silver paper from inside cigarette packets. The coloured wrappers of chocolates (especially Quality Street) were also saved and used. Crepe paper of various colours cut into strips made excellent streamers.

Each year as the Christmas tree is decorated memories of childhood Christmases surface, but now it’s my daughters exclaiming over their homemade efforts! ‘What do you keep these for, Mum?’

One day, when they have their own homes they’ll understand the value of  treasured memories and no doubt recall happy times around the kitchen table making the decorations.

Today, I remember Lesley’s  gift that long ago Christmas. It will always remain special because John died several months later in September 2002.

2001 was the last Christmas the four of us shared and thanks to a dear friend we had a magnificent tree.

7 thoughts on “A Memorable Christmas”