Don’t judge each day by the harvest you reap but by the seeds that you plant.

The Stevenson clan: Robert, his wife Fanny and her son Lloyd, and Robert’s widowed mother settled on the island of Upolu in Samoa in 1890. RLS had a house built at the foot of Mt Vaea, which he called Vailima, and he continued to write, but also became an advocate for the Samoans.

Vailima, a beautiful island plantation home has been restored and is now a world-class museum set in a national nature reserve and botanical garden. A tour in its coolness a welcome relief when I descended Mt Vaea via the Road of the Loving Hearts. In the house, there are many photographs of life at Vailima with the Stevenson Family.

The house when RLS lived there

A view showing the separate kitchen in case of fire

Very similar to what has been restored

The home and grounds have been restored to reflect the comfort expected in colonial times, but also the use of many Samoan building products. It is easy to imagine RLS writing here and filling the spacious rooms with many visitors. 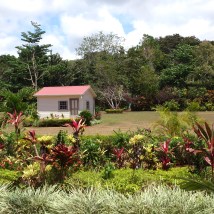 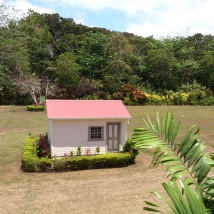 The kitchen separate for fear of fire

The tasteful restoration as accurate as possible and the house repaired and reinvented as a museum by American benefactors who set up a foundation to raise money. Tilafaiga Rex Maughan, its primary benefactor, chairs the Foundation. Two board appointees represent the Government of Samoa. The Board oversees the fiscal, regulatory and policies of the not-for-profit entity.

The Vailima estate was purchased in 1900 as the official residence for the German governor. After British/Dominion confiscation, it served successively as the residence for the New Zealand administrator and the Samoan head of state after independence before being reclaimed as important national heritage.

It is a golden maxim to cultivate the garden for the nose, and the eyes will take care of themselves.

The guides giving the tours of the house are extremely well-versed in all things RLS. As you walk through the Great Hall, RLS’s Library, his Smoking Room,  five bedrooms and numerous nooks and crannies they share anecdotes from the life of the famous author. They point out what is authentic and what is a reproduction.

The tour at $20 tala ($10 Aus) superb value. The highlight being the guide singing the Requiem from RLS tombstone – a spine-tingling moment. The Samoan’s have a reputation for memorable voices like the Welsh. Tips are not expected but considering how poor most Samoans are (an average wage of $150 tala per week) this would be the moment to be generous.

RLS wanted fireplaces and a Smoking Room to remind him of Scotland. The fires were never lit!  Throughout the house, the darkness of the beautiful polished wood softened by large windows and French doors letting in the wealth of Samoan sunshine. The Great Hall restored with Californian redwood and replica furniture.The Tapa Room has the local wall covering called siapo or tapa from the original cultural pattern.

Tapa is a cloth made of vegetable fibre and stained in various striking patterns. Widely used by the Samoans for clothing, curtains, beds, and many other purposes, today any clothing from tapa is ceremonial or for the tourists.

Upstairs the bedrooms reflect the various personalities of the household. A photograph of RLS’s mother could be a slimmer Queen Victoria a la the dark dress and crocheted cap.  Mrs Stevenson senior didn’t cope with the heat, disliked the house and complained daily about its gloominess – even the view of a tranquil garden from her window couldn’t console her.

There are no foreign lands. It is the traveller only who is foreign.

Fanny and RLS slept in separate rooms because he liked to write at night, but he had a secret door/hatch installed in the wall so they could talk to each other when lying in bed. RLS was often ill, and Fanny became his nurse as well as looking after everyone else in the household plus many of the local Samoans. The sick bed and medicine chest often used according to Fanny’s biographer:

A disease of the tropics, said to be transmitted by the bite of mosquitoes, which causes enormous enlargement of the parts affected. Mrs. Stevenson cured this boy, Mitaele, of elephantiasis by Dr. Funk’s remedy of rubbing the diseased vein with blue ointment and giving him a certain prescribed drug.

As I walked through the rooms and examined the photographs and paraphernalia, it was easy to imagine the scents and sounds of a busy household. The Stevenson’s hospitality matched the welcome and friendliness the Samoans are famous for so there would have been laughter, chatter and music.

Talk is by far the most accessible of pleasures. It costs nothing in money, it is all profit, it completes our education, founds and fosters our friendships, and can be enjoyed at any age and in almost any state of health. 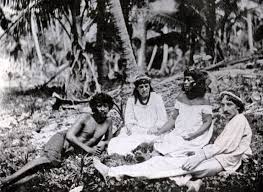 Relaxing on the lawn

the household gathered on the verandah 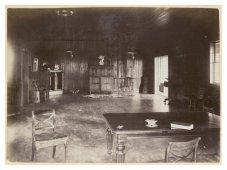 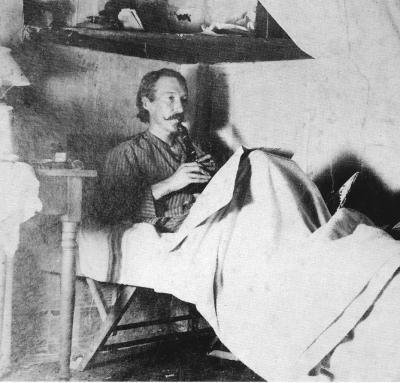 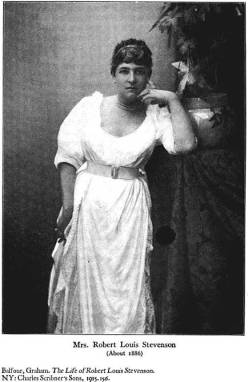 One of the ways the RLS Museum and grounds are able to remain for posterity is by generous donations, entry fees and also hiring out the grounds for celebrations. It has become popular for weddings, but the stipulation is ‘no alcohol’, the wedding must be dry to minimise damage to the heritage property.

The day I visited, the final preparations were being added for a wedding that evening. One of the guides urged me to look inside the marquees and confided the wedding planner was famous in Samoa. Perhaps I’d seen the advertisement on television, ‘You know about Fa’afafine?’

I smiled away my ignorance as I went to have a look at the preparations that had taken two days and vowed to look up Fa’afafine later.

Fa’afafine of Samoa are Samoa’s 3rd gender – the term  fa’a means ‘to be’ and fafine means ‘a woman’. Fa’afafine are not just cross-dressers nor are they males reared as females (a myth often believed by foreigners). Mostly they see themselves as female despite the gender markers, and they grow up choosing to identify with the female rather than the male gender.

Acceptance levels of fa’afafine are at an all time high with the Samoan Prime Minister patron of the Fa’afafine Association. However, some villages and districts treat fa’afafine differently although I didn’t see any evidence of this in my short time in Apia. In fact whenever fa’afafine were mentioned or seen around Apia everyone seemed proud.

Samoan culture treats and respects fa’afafine. Western culture through religious influences does not so the fa’afafine entrench themselves in their culture in order to be accepted into the community, with resounding and remarkable success.

My day at Vailima and Mt Vaea was a resounding success too – increasing my knowledge on so many aspects of Samoan history and modern day culture. I left the gorgeous surrounds to the tinkling laughter of the ‘celebrity’ wedding planner and helpers.

I reflected on Samoa, RLS and life in general and agreed

That man is a success who has lived well, laughed often and loved much.