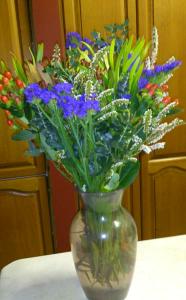 I know it’s Father’s Day today, but my lovely daughters bought me flowers and took me out to lunch at Abbey Road, St Kilda where a background of songs from the 60s and 70s and a delicious roast dinner with ‘Yorkshire Pud’ (their father’s favourite) reminded us of the happy times when John was alive.

As my youngest daughter MJ said this morning, “September is a crap month – it starts off with Father’s day and ends (21st) with the anniversary of Dad’s death.” I’m sure many people who have lost ones they love, for whatever reason, feel the same. There’s even a song to encapsulate how we feel:

Of course in this hemisphere, September is the month of Spring and Summer is still ahead, but the Neil household relates to this song.  Waking up to sunshine and evidence of new birth as  flowers in the garden begin to bloom may help lighten the mood, but the gloom of despair still lurks.

I try to be buoyant and focus on Nature’s beauty: inhale the sweetness of the roses and geraniums, the camellias beginning to bud, the rosemary and lavender blooming. I know we are fortunate to have a nice home and garden and to have each other. 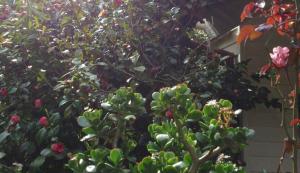 And this past week,  the media has been filled with horrific pictures and stories. My grief has paled beside the enormity of what refugees face. It is hard to go about normal business never mind be happy when you know there are so many desperate people fleeing tragedy.

The scenes in Europe tragic, but also inspirational. People have lost loved ones, their homes and their jobs, but thank goodness they still have their spirit and a desire to survive and start afresh.

The worst and the best of humanity on display. Well done to Angela Merkel of Germany for showing leadership and humanity  and shame on the heartless people who turn their backs and the fascist demonstrators  who abuse the desperate people on their journey to a better life.

I only hope the shift in attitude from some of Australia’s political leaders will mean the end of official policies here of mandatory offshore detention and denying citizenship to people seeking asylum if they arrive by boat. Despite the political spin being mouthed by Government, our record on this issue is appalling. The hypocrisy being shown is astounding.

If the current crop of politicians believe what they are saying we have thousands in detention on Christmas, Manus and Nauru Islands that would benefit from compassion and release into the community.

I’ve written poems and stories about asylum seekers and refugees over the years. One of the ways I cope with what seems insurmountable odds and inexplicable human behaviour.  ‘Man’s inhumanity to man’  first documented by poet Rabbie Burn’s  in ‘Man was made to mourn…’ As writers often all we have is our words to save us from going insane.

The trees cling to fragile foliage
like mothers reluctant to let
their children go.
The winter sun radiates
white light promising a day
of autumn glory…
It is Melbourne after all.

A blue sky pockmarked by fluffy clouds
reflecting a sea of shimmering blue
But beyond the benign bay
tragedy intrudes
fear and desperation meets
fear and distrust.

No need of Siren’s song
to lure the mariners to their death.
The monster from the deep is
dressed in political spin and
ideological hubris.
Christian charity in short supply.
To seek asylum deemed illegal

It is Australia after all.

At 30th June there were 945 men in detention on Nauru. 41 have been granted refugee status, but it is too dangerous to go anywhere else in PNG and they’ve been put in a transit camp waiting for freedom. On Nauru there are 88 children, 114 women and 453 men. All there more than 2 years.

Recently, on the ABC  7.30 Report they interviewed a doctor speaking about the dreadful abuse of children offshore. He had tears in his eyes describing the number of children with Post Traumatic Stress Disorder (PTSD) and meeting a six year old girl who tried to kill herself!

As a nation we must seriously ponder our humanity – what brings a child of 6 to a decision life is no longer worth living?

Australia takes 109,000 net migration including those coming for business or family reasons. There is 60 million displaced people in the world – the greatest humanitarian crisis on record. About 59 million of those just want to return home and be safe.

A procession of hearses
Carry innocent victims
Of a plane explosion.
Collateral damage of war
Becomes a television spectacle.
Families plead for privacy
Pain and grief is not a story.

International Refugee Conventions
Ignored and challenged.
A boat-load of asylum seekers
Floating in crowded detention.
Collateral damage of xenophobia
Government silence deafening
Pain and grief is not a story.

The death toll in Gaza grows
Lives ruled by the noise of sirens
Rockets decide who dies
But humans take aim.
David and Goliath a myth.
Palestinian pain and grief
A never-ending story.

When a child asks ‘why?’
The truth garbled white noise…
Whatever gods we choose
To worship and obey
Are not to blame
For human shame.

In Lebanon 260 per 1000 of population are refugees living on their border. Even if we increased our intake to 50,000 it would be only 2.4 per thousand of Australia’s population. It is time all of us who call ourselves writers put pen to paper to give desperate people a voice. If enough people send emails or letters to those in power who can make decisions and demand a stop to abuse in our name, there will be change.

Seeking asylum is not illegal and fleeing from war, poverty and persecution is perfectly natural.

Refugees and asylum seekers
wanting safety
protection
a new life
cross stormy waters
with courage
seeking justice
and a welcome
from Australian society.
Young and old
with amazing personal stories
of darkness, bribery, corruption
challenges faced
uprisings survived
prisoners of conscience
student leaders
from Afghanistan and Burma
seeking resettlement
and freedom
seeking to celebrate and contribute.
Their hopes crushed
basic human rights violated
harsh lessons in cruelty
as the innocent
are locked up.
In limbo
on Nauru and Manus Islands
detention not freedom
Why?
We can do better
Stand up, Speak up
refugees and asylum Seekers
Welcome here! 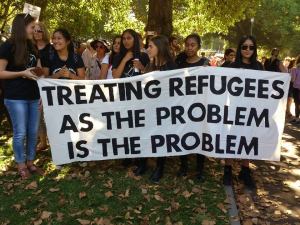