On Saturday night I couldn’t settle. A telephone call from Canberra the day before said Margaret’s death was imminent – within 24 – 48 hours. The vigil of her final hours carried out by  two other friends – the remainder of our “gang of four” – sitting either side of her bed at Clare Holland House hospice each holding one of Margaret’s hands.

“You’re too far away Mum to do anything , but worry. Try and relax… we care about you.”

I started a jigsaw puzzle after my daughters insisted I focus on something pleasant. Their words of wisdom, sympathy and nurturing an appreciative role reversal.

“Remember your last few days together in January, focus on that image and all the good times you’ve shared.”

Margaret’s dying had occupied thoughts and shaken emotional equilibrium for weeks. Daily text messages or phone calls from close friends, an ever present reminder someone I’d known since teenage was dying from breast cancer – a disease my body was fighting successfully – so far. Margaret’s lobular cancer, detected too late had spread to her brain stem and groin. Life seemed unfair and good health such a lottery!

I’ve experienced grief many times, especially over the last few years.  Friends and family farewelled; the most poignant goodbyes being husband John and my parents. I understand about complicated grief. For several years, I could identify with this state.  I appeared to “get on with life” , but my pain never fully receded into the background or diminished. It was even physical, with a permanent pain in my heart as if a stone lodged there, pressing its weight, interrupting normal rhythm. I became the great pretender, perfecting the art of an outward smile without any inner joy.

To endure life remains, when all is said, the first duty of all living beings… If you would endure life, be prepared for death.

Sigmund Freud, Thoughts for the Times on War and Death

Thoughts and memories of those I’ve lost circle in my head on a permanent loop. Each death a reminder of the one before: I don’t believe my yearning and longing for John will ever disappear and memories of others can appear unbidden, triggered by a smell, a piece of music, a photograph, a snatch of conversation… but I do “get on with life”!

And so when the call came at 6.00am Easter Sunday, to say Margaret had died the night before, I knew exactly when the moment had come. On Saturday evening, just after ten o’clock I’d had a strong urge to go outside again and watch the progress of the lunar eclipse. As I stood watching the clear night sky, the angst and worry about Margaret’s dying dissipated. I felt she was at peace, free from suffering and earthly worries .

She breathed her last breath at 10.15pm, April 4th 2015, 25 days short of her 68th birthday. Mary Jane’s photographs capturing my thoughts that Margaret joined all the others who have gone before, including her parents. “Who would have thought dying was so difficult,” she had whispered last week, insisting she saw her parents waiting.

That waiting now over.

Into the darkness they go, the wise and the lovely.

After I received the news, Mary Jane and Anne bought me a beautiful orchid. Tall and willowy, like Margaret, a wonderful gift of life!

” To plant in Margaret’s memory, Mum.”

Later, I went for a walk by the sea with a writer friend – another life-affirming pleasure and always a solace to me. Although it’s autumn, abundant signs of fresh growth promised new life. 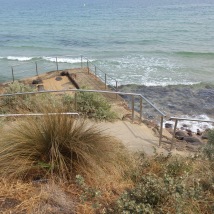 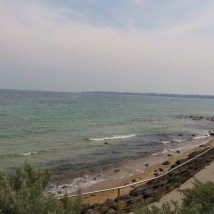 My garden reflects the rich tapestry of family life. The plants are a mixture of immigrant and native, just like us. Some are already memorials. Two sturdy bottlebrushes (callistemon linearis) remind me that two mothers grieve for sons. The wattle, as straight as a mast, thrives, but reminds me of a friend who died in despair. A rose from Coydon a link to the family home with Mum and Dad. There are cuttings from friends, plus birthday or appreciation plants nestling beside Mother’s Day flowers, nurtured by tiny hands.

Each has a story.

The rosemary bush by the mailbox extra special, an unexpected gift from a lady whom I‘d never met.  In September 2002, when John died after a heroic struggle with debilitating lung disease, a small healthy rosemary plant arrived with prayerful condolences.

In ancient literature and folklore, rosemary is a symbol of remembrance. It’s also an emblem of fidelity with a belief that its properties improve memory. Rosemary has particular significance for Australians because it grows wild at Gallipoli.

Rosmarinus Officinalis (‘Dew of the Sea’) is an evergreen shrub of the mint family. John loved the sea and often shared stories of his 16 years in the Royal Navy. His affinity with the sea led me to scatter his ashes at Stony Point. He’ll revisit many shores, including Mordialloc. And as the girls and I travel the world we know he’s always near.

The girls made tiny sprigs of beribboned rosemary for people to take home after John’s funeral, a custom since 1584. Rosemary even gains a mention in Shakespeare’s Hamlet when Ophelia, decked in flowers said to Laertes: ‘There’s rosemary, that’s for remembrance.’ Shakespeare’s plays another love John and I shared – the ties that bind. So many memory triggers…

My garden will always be a work in progress. John’s announcement in 1984 when we bought the house prophetic, ‘the garden will have to survive on neglect. There’s enough to do inside to keep me occupied for years!’ However, like love, the rosemary flourishes and many passers-by and neighbours pick sprigs for their Sunday roast and other dishes. The other plants thrive too, like me they are low maintenance!

The ‘renovator’s delight’ garden still has the original couch grass with a small clump of Strelitzia regina (Bird of Paradise) and a bluey-mauve Blue Moon rose, shrubs spectacular when in blossom. Acquired plants fit the soil and landscape of the area; flora enriching the habitat for native birds, butterflies and bees. Drought-tolerant plants minimise water use and are wildlife friendly. There is beauty inherent in the evergreen native trees and indigenous plants produce the harmony I desire – native and exotic.

Bees and butterflies buzz and flitter from agapanthus to lavender, from rosemary to geraniums. Wattlebirds feast while insects scurry on lobed dark green leaves. A ringtail possum nests nearby. Blazing red hot pokers (kniphofia) create a rainbow in autumn.

Each day as I check the mailbox, or go for a walk, the rosemary reminds me that ’flowers seem intended for the solace of ordinary humanity.’

I ponder where I’ll plant Margaret’s orchid to reflect on life and feel blessed.

Death is an absolute mystery. We are all vulnerable to it, it’s what makes life interesting and suspenseful.

6 thoughts on “Vale Dear Friend – Have You Solved The Mystery of Death?”