I like nonsense, it wakes up the brain cells. Fantasy is a necessary ingredient in living, it’s a way of looking at life through the wrong end of a telescope. Which is what I do, and that enables you to laugh at life’s realities.Dr. Seuss

We were in holiday mode, but this call guaranteed to speed up the juicing of celery and carrot and the cooking of porridge oats! Fortunately, Anne was awake and moved MJ’s car from the driveway and parked it over the road.

This delivery of 10-12 boxes anticipated for some time. Shipped from Canada in July, they’ve been with Australian customs doing a thorough (or slow) job of checking the contents. I’d received a call in October they’d be on their way to Melbourne from customs in Sydney ‘soon’. When pressed the voice on the other end of the phone said, ‘2-3 weeks’. Yesterday they’d rung and arranged deliver for 1.00pm – two days before Christmas.

I offered to store the boxes for D, a family friend until she decides where to resettle after nine years in Canada. There are also two boxes belonging to Anne from her travels. D included them in the shipping. Payment is calculated by space taken up in the  container and a couple of extra boxes didn’t add to the cost. Her kindness meant Anne could keep special paraphernalia collected on her travels and the memories they’d trigger.

The truck duly arrived and I experienced déjà vu… 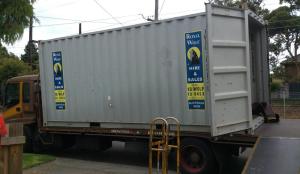 The same company employed 30 years ago, when John and I moved from our flat in Prahran to the house here in Mordialloc. That truck smaller. One man – not two, and no slide down ramp, straps or compartments inside the truck to make packing and securing cargo easier. No obligatory fluorescent safety shirt either, but definitely the same company. It had survived the various economic shenanigans of Australia’s economy.

In October 1984, we booked the truck early (8.00-8.30am), hoping to travel the 20kms to Mordialloc before the heat of the day set in and also to relieve my parents, who had collected the key and opened up our house. Mum promised ‘to put the kettle on’ to welcome us and christen the place, bringing all the necessary accoutrements from Croydon (a 43km drive).

Although retired, Dad and Mum were full-time parents again after my eldest brother’s divorce. My brother built a sleepout (Aussie slang for small bungalow) at the back of their property, but his two boys moved into the house with my parents. Dad took the boys to kindergarten and primary school; his daily routine revolving around their schedules.

The Girl Guide motto of my youth insisted “Be Prepared” and calculating how long it would take to load the truck and travel, my planning and timing worked out to suit Dad and Mum’s parenting obligations.

No mobile phones in those days and we had disconnected the telephone in our flat and didn’t expect the new telephone in the house to be connected until the next day. Mum and Dad were incommunicado! We hoped all would ‘go like clockwork’. I’d prepared over several weeks: boxes packed and labelled, John and I living like gypsies, washing and wearing the same outfits, cooking one dish meals…

9.00am came and went and no sign of our removal van. We kept busy carrying the furniture and boxes down to the nature strip and stacking them near where we assumed the truck would stop. John muttered about me heavy lifting and ‘where the hell’s this truck?’ A neighbour kindly let us use their telephone, but a disinterested voice said, ‘it’s on the way and should be there soon.’

‘It’ was coming from Hawthorn, 6km away, the company chosen for its proximity to Prahran. Maybe the traffic was bad, or an unforeseeable delay occurred, perhaps a breakdown, or an accident. We vacillated between cursing and feeling guilty the truck could be in trouble.

Meanwhile, huffing and puffing up and down several flights of stairs, we wished we lived on the ground floor, although grateful to have attracted half a dozen  neighbours generous enough to help us. I’m sure they felt sorry for John – I had 43 boxes of books – yes even then I was an avid reader, dreaming of being a writer. An incorrigible hoarder of books, I regarded each one a friend and couldn’t cull!

11.00am, hot and exhausted we took to checking nearby streets in case the truck had got lost. On full display for passersby to gawk and shake their heads, our goods and chattels filled cardboard boxes, the contents and destination (kitchen/bedroom/lounge…) marked in black Texta on the side. Suspended in the air between us the unspoken fear – what if the removal van doesn’t show? John glanced at his watch for the hundredth time. The smell of coffee and toast drifted from a little cafe on Greville Street.

‘Mum and Dad will have put the kettle on,’ I said.

‘I’ll make you a cuppa, ‘ said June from the top floor flat as her partner Hans dabbed his brow before turning to John, ‘we need a beer, mate!’

‘I wish,’ said John, ‘but I better see how much of this lot I can put in the car.’ He started separating some of the smaller boxes. ‘We won’t have much time to load up.’

I peered at my watch and did a quick calculation in my head, Dad has to leave at 2pm to be in time for the boys – will we make it?

Our morning began with excitement and anticipation of taking possession of a house we’d bought to build a life together in a place we loved, but the day was souring by the second. Panic worked its way through my digestive system from my squirming stomach. The pulse on John’s right cheek throbbed, a sure sign of building anger and frustration.

I’m not sure whether we heard the truck’s engine, the grating gears, or just the vibration as it rattled around the corner and turned into our street, but at last it arrived, dilapidated and belching exhaust fumes. No websites in those days or Google Earth; we’d relied on the advert in the newspaper and a pamphlet. Pictures that didn’t match what grumbled to a halt.

The driver emerged, mumbled hello, and stared at what was to go into the truck. Oh, if only camera phones had been around! The young man, alone and quite stoned. Long dark hair, unkempt beard and demeanour and crumpled t-shirt advertising how much he loved the 70s! John and I exchanged glances, we were in a sitcom waiting for the next slapstick gag.

The stoner stood immobile. Eyes fixed on our stuff for so long we thought he was trying to load the truck by osmosis.
John said, ’Mate, we have a deadline and you’re nearly three hours late. Haven’t you got a sidekick?’
‘Sorry, but … mumble, mumble… only me today.’
He took a pouch of Old Port tobacco from his pocket. Crammed it back in straight away when we glared our disapproval. A scratch of the head and beard before announcing, ’Okay, we’ll do the boxes of books first.’

Once we got him moving he did know how to pack the truck, but only had two speeds: slow and stop. The loading process so unhurried, we left him to his own devices and took some bare essentials in the car because I feared it would be midnight before he finished the job and we had to get down to Mum and Dad.

Suffice to say, he did finish loading and everything arrived undamaged, but darkness had fallen before he found Mordialloc and as we helped him unload, my prediction on timing very close to the mark!

How the company survived is a mystery… yet 30 years later it appears to be working well, or perhaps not …

‘Mrs Neil?’
‘Yes.’
‘It’s Adam from K….Removals. We’ve found another box on the truck for you. Sorry, our mistake. Can we drop it off later.’
‘Another box? Are you sure?’
‘This is definitely for you.’
‘Okay, I’ll be home this afternoon.’

I stared at the 22 boxes filling the garage, plus a large green wrought iron shelving unit. No one had said anything about furniture. Anne couldn’t remember furniture being shipped, so with a bit of rummaging we discovered several boxes stamped with ‘Laura Ashley shop supplies.’

I rang D at her sister’s home in Mildura.

‘Hi D, your boxes have arrived. How many are there supposed to be? And did you ship over furniture?’
‘Furniture? No. There are 18 average-sized boxes, two of them Anne’s. They’re all numbered.’
‘Right… I’ll be in touch.’

What is going on? The truckies hoped to finish work early, which is why they changed the original delivery time. They’re not going to like my phone call.
‘Hi Adam, this is Mairi Neil from Mordialloc. It’s about the boxes.’
‘We’ll be there shortly…’
‘I’m not hurrying you up… it’s just I’ve checked with my friend and she didn’t ship furniture, or giant boxes. There’s been a stuff up.’
Silence.
‘Are you sure?’
‘Yes. There’s a wrought iron shelving unit that shouldn’t be here, plus several large boxes.’
Silence.
‘I’ll check, but my instructions say they’re for you.’
‘I suppose I could E-bay them, but whoever ordered them may get upset.’
Forced laughter.

The boxes were duly picked up and the stray box delivered. I assume the removalists managed a happy ending to the day. They’d work it out eventually.

The whole episode a metaphor for writing – a good idea to start with, chopping, changing, different perspectives, worry over word count, words in, phrases out, thinking of the reader, different interpretations, setting deadlines, worrying about making them, but managing to do it, is the finished product perfect, does it have to be?

Sometimes the more things change the more they stay the same and it’s never too late to write up that story – you know the one you recount to people and they say you should write about it!

Life is full of stories. I look at the first picture of our home and the one snapped this morning – stories in every tree, plant, fence line, and houses on either side. Maybe my next story will be ‘The renovator’s delight (yes, that was the advert we saw in 1984) now a loving comfortable home surprises, disasters and triumphs included!’ 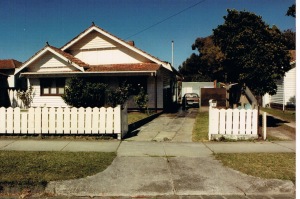 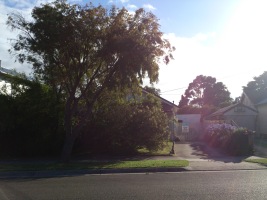