“One writes out of only one thing—one’s own experience. Everything depends on how relentlessly one forces from this experience the last drop, sweet or bitter, it can possibly give.” —James Baldwin

Mercurial Melbourne did it again yesterday. As I listened to the wind howl and the rain splatter and felt the temperature plummet, I wondered what happened to the notoriously hot Christmas weather sunny Australia promises? But then, it is Melbourne – four seasons in the one day, and predictable in its unpredictability.

A good time to pause and remember last year when I was somewhere predictable – and cold – very cold! I spent the Christmas with my daughter Anne, into her third year travelling in North America and resident in Toronto for a couple of those years.

On Facebook, I read a message from Tovah and Michael and the photograph of their hanukkiyah in their window holding the candles to celebrate Hanukkah. This photograph lets me time travel to last year.

I pause at the nearest panoramic window and soak in the first outside view of Pearson Airport, Toronto. Incandescent fixtures gleam with a second skin and neon lights transform mundane utilities into glittering crystal artefacts. A cheap flight enabled this holiday to be with oldest daughter Anne, a back-packer who fell in love with T.dot.

‘Look Mary Jane! Isn’t it beautiful?’ I gush, unable to hide the rising excitement at the prospect of a Christmas not experienced since I was nine-years-old. My family emigrated from Scotland to Australia in 1962 and we had to acclimatise to the cultural shock of Christmases ‘Downunder’.

Born in Australia where Christmas is often spent at the beach and a white Christmas only a song until now, my daughter laughs and catches my childish enthusiasm.  Our grinning reflections vindicate the spur of the moment decision to fly to Canada. I click my camera phone and capture a winter scene, albeit a world of workers swathed in fluorescent safety gear attending planes through a shimmering veil of snow. 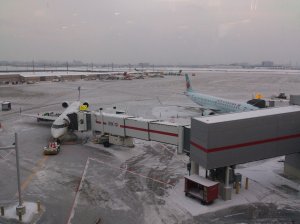 A close-knit trio, since the death of husband John when the girls were teenagers, we’d adjusted to the sadness of special days like birthdays, anniversaries and seasonal celebrations, however, into her third year away from home, the last two Christmases without Anne only made bearable by Skype.

The most special gifts don’t involve money and when Mary Jane and I discussed the ubiquitous Christmas List, we agreed with Dr Seuss, Christmas, ‘doesn’t come in a store…(it) means a little bit more.’ In a tone that did the Spice Girls proud, Mary Jane said, ‘What I really really want is for us to be together–-all of us!’

And here we are walking into the widespread arms of Anne wearing a smile as warm as an Aussie Christmas. She clutches two single red roses and a bundle of winter accessories in case we are ill-prepared. With a mock shiver, she explains, ‘It’s the chill factor that makes you freeze.’

The uninhibited joy and unconditional love etched on the faces of the girls, a delicious moment to be stored in my memory bank, along with Anne’s protracted ‘Mum!’ which blocked the cacophony of the airport terminal for the few seconds it took me to exit customs. The bear hug lifted me off my feet.

From the airport, we catch a bus and two trains to Ossington where Anne shares a house with three young Canadians. The journey seamless, if a little cold, as we adjust to winter’s icy clutches and the face-numbing air. Evidence of Christmas abounds with passengers toting brightly wrapped parcels and bulging bags. The occasional decoration glimpsed as suburbs flash past. When we climb out of the subway at Ossington a silent fall of snow greets us. Anne suggests a taxi, fearing black ice; a treacherous surprise turning pavements into obstacle courses. ‘You left Melbourne 32 hours ago and must be tired!’

We insist on walking. Mary Jane determined to savour her first sojourn in the snow, and I have a wonderful feeling of love and contentment to keep me warm. A wind is absent, but snowflakes swirl and tantalise, falling soft and gently like feathers. Mary Jane tilts her head back, turns her face to the starlit sky, pokes out her tongue and drinks the gifts from Heaven. Our hats, scarves, and coats dusted with icing sugar specks. A magical transformation.

We giggle and twirl, slip and trudge, drag suitcases along the street, Anne confides it is usually empty and dark at night, yet houses twinkle and shine lighting our way. Christmas advertised–more flamboyantly by some–until we reach the house opposite Anne’s. It groans under the weight of bud lighting flashing every colour in the spectrum to make rainbows in the air and on the snow-stained road. We spot Santa and his sleigh, reindeers, candy canes, snowmen, penguins, bells and lanterns, trees and presents; every commercial Christmas motif imaginable. 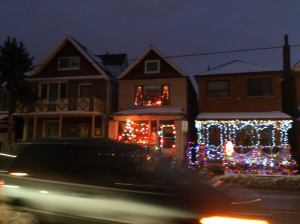 Cannily stepping in footprints carved by others, we cross the road to Anne’s home above a Portuguese bakery; dim and conservative in comparison to brightly lit neighbours. We climb internal wooden stairs, the heat like a blow torch. We don’t need encouragement to strip off protective gear in the tiny hallway. ‘Welcome to Canada,’ Anne jokes, ‘where you allow 20 minutes just to put on and take off all the extra winter layers!’ Housemates appear from their rooms to welcome us and point to a huge sign they’d made declaring themselves: ‘The Neil Appreciation Union’.

It is almost a week until Christmas Day, but Anne announces a surprise. Her close friends Tovah and Michael have offered their cosy flat to us to spend Christmas Eve, Christmas Day and Boxing Day. They’ll be visiting relatives out of town and thought we’d appreciate a ‘home away from home’ to be a family at this special time of year. This practical embodiment of the spirit of Christmas from two strangers becomes the highlight of our Canadian trip.

The few days before Christmas Eve, Mary Jane and I explore Toronto while Anne is at work despite a ‘catastrophic ice storm’ slamming the city, destroying 20% of tree coverage and leaving hundreds of thousands without power. Fortunately, Ossington is relatively untouched, but as subzero temperatures and wind chill announcements dominate nightly News, I wake each morning to the drip of ice melting and pooling on the windowsills in Anne’s tiny room. I miss the raucous sound of Australian birdsong: magpies carolling, the wattlebirds harsh chok-choks, and Australian ravens cawing as colourful rosellas swoop and squeal.

However, the winter hush has its own charm and I have my two daughters close. Grey squirrels cavort among tree branches stark and dead beneath winter’s cloak, and on our walks home in the evening tree branches turn majestically silver with coruscating stars and pale moonlight highlighting their breathtaking beauty. 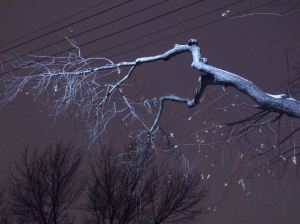 Christmas card scenes are everywhere, icicles suspended from eaves and gutters, rooftops and gardens caked with snow while brown and withered foliage peep from pristine white coats. Coated with frost, hardy plants still live although their crystallised leaves snap if touched. Squeals and laughter infectious as families toboggan and slide in nearby parks, and cute dogs wearing booties chase frisbees and balls. 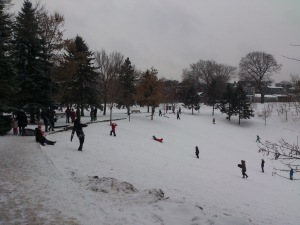 Tovah and Michael’s apartment has double glazing and power.They leave a message on their kitchen whiteboard after Googling Aussie slang. Any feelings of being in a strange land dissolve with our laughter:

Good arvo and Merry Chrissie cobbers!
Open some prezzies and drink some amber fluid.
There is a Maccas within cooee and a bottle-o a few doors down!
Eat a lot of lollies and have many grogs,
hopefully not to be followed by a liquid laugh? Or technicolour yawn (what!?)
Yabber on ladies…

On Christmas morning as dawn penetrates the blanket of light grey cloud, I stand by the window and watch snowflakes flutter to the ground. Within moments, already partly covered bicycles and parked cars are submerged and roads and paths disappear as if a gigantic can of white paint has spilt. Street lamps glow orange, the world is silent and still. I have a lightness of being. 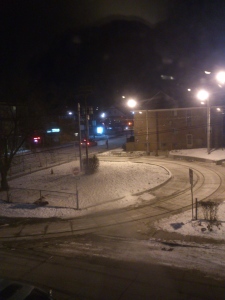 Gentle snores from Anne and Mary Jane mingle with the poetry from countless carols playing in my head and memories of Christmases past. The age-old Christmas messages of joy, peace and love my reality this wonderful Canadian Christmas.

3 thoughts on “In the Presence of Christmas Past”